A movie that I have been waiting for when I saw the movie preview months ago, as another movie by Director Ang Lee knowing him that he will produce another remarkable movie. Life of Pi is base on a best selling novel.

Life of Pi is about a young guy who survive in a ship wreck disaster that hurled into an epic journey of survival in the Ocean. With a few survivor that bring them through the journey, and last standing with the Bengal Tiger with how Pi Patel build the connection between 2 of them during this surviving journey. Beyond that during his journey, he came out with a great adventure that no one would have believe in it.

I am so impress with this movie as you have to watch this movie with your imagination as the effect of 3-D just blast you away. During the movie I was like whoaaaaa. . Those effect of the movie really bring your imagination to another world. Unbelievable. Its a movie that is produce with some 3-D effects therefore its a must watch in 3-D. If you don not don bother to watch it.

One of the best movie with human 3-D effect after Avatar. A movie which is a MUST WATCH ~ Do watch their making of Life of Pi, you will be so impressive how much effort and after production that they have done.

Apple of my Eye (那些年，我们一起追的女孩)

I was told that this is a movie based on thru movie, or more like a best selling novel in Taiwan, after this movie had hit the cinema, it had make it top chart in several country making me looking forward for this movie.

A movie that flash back all our high school memories, puppy love, how mischeif we were. . then after high school, where are we heading too .Some ppl have great memory flash back some no. .  It really depends what was your high school life is .. :D, mine was something similar to the movie . .

I would say one word.. A great movie as its just a very normal movie and recommended to watch as it bring back your memory . .I do not mind to watch again 2nd time . .

A movie on the war between the gods and the half human race that had long been gone and the rise of human race, was lead by another evil leader that try to posses the god’s secret weapon, one of the Bow to rule the human race. As to prevent the war to happen, the god change to human form and train one of the human to prevent it.

Not a bad movie after all, its  a movie that you like or you hate it . .

The movie is around 2 hours ++ and its not bad after all that how they form their own group to go against nuclear made mutants.

Priest is on war with vampire on those days called the Vampire War, and one of the priest got left behind during the war and was stuck in a nest then transform into a human vampire. Kidnap one of the priest niece, the one of the best priest disobey the Church order as they said vampire already extict from their previous war, and he went to search for himself.

I didn’t expect the movie to be good, but turns out to be a movie worth watching. Just lower down your expectation . .

The movie is about a group of soilders being lead by one of a top group in the Empire of Rome which is the Ninth Legion with 5000 army that just disappear like that on the north part of the empire. From then, the government build a huge wall to cover up of the embarrass situation. The son now is trying to restore the pride of the family that he went out of the wall that they called it end of the world as most of the Roman’s people went out and never came back. His quest begins . . .
Not a bad movie . . and of course thanks to Jason Ong for the tickets.. . .. 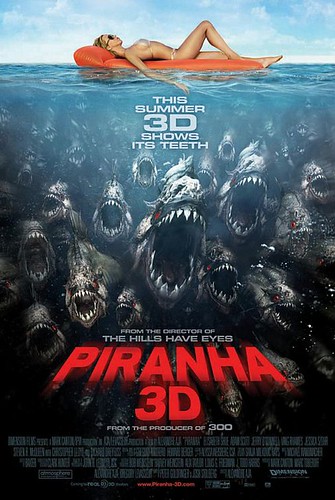 One of the movie that every one is anticipated to watch but I am quite suprise that most of the trailer do shown in 3-D but why Malaysia is not showing 3-D as me and my friends are waiting to watch this show in 3-D. Want to get bitten. This movie is not that bad afterall with a flock of fish attacking all the humans…there are also alot of unccensored scenes with human flesh flying around and one of the best thing you will see is that this movie is film during their summer break so all the girls are in bikini’s..

Overall, not a bad show to watch but very short film, it is about 70 minutes if not mistaken.