Browsing
For a foodie like me, I always would like to meet someone famous in the critics not until recently I got a chance to meet Chua Lam live in person. A famous food critics that is born at Singapore and now resides in Hong Kong, columnist and often appear in the media as he was one of a great producers, with his notable work like Mr.Nice Guy, Thunderbolt and a few more, also feature as a judge in Japan great series, Iron Chef. He is also a great writer.

With his special appearance and hosted by one of local famous host, Ms Siow Hui Mei, the crowd and media had flock into this place within minutes and everyone is aiming at the front seats. One thing good being in the media is always get to occupy the front row. 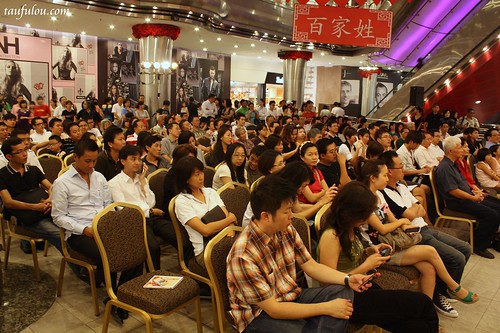 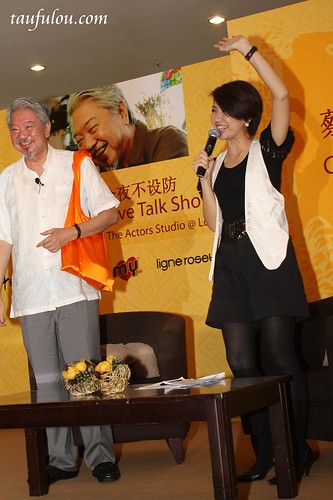 I have always only get to see him on television and never thought that get to see him in person. Before this event, which was a day before I manage to catch one of his most recent shows that he bring a few leng lui to hunt for our very local Malaysian food. 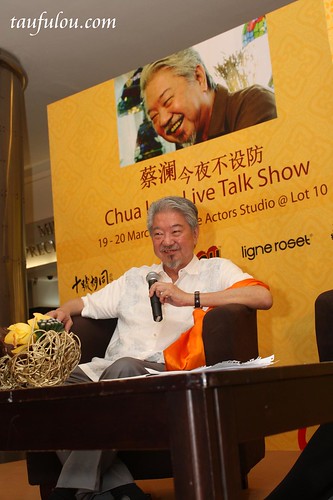 It is interesting to see him share to us about his life journey and filled the environment with laughter. He is a person which is seriously open minded that is why, to some parents thinking of brining their young kids have to consider. I just love the way he talk, straight and openly. He is also very interactive accepting and answer all the questions that the audience asked. 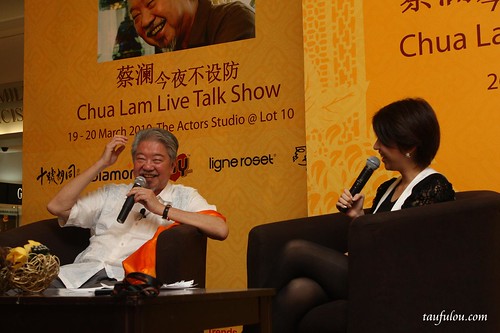 Could not deny that Ms Siow Hui Mei is a great emmcee, act and think very fast in most of the response. Well, if you do watch over very local show Tiger WooHoo, she is also one of the actress.
After the small little chat and also promoting on his next life talk show, held a autograph section which leads to alot of people bought up his book at a very reasonable price of around RM20 per book. 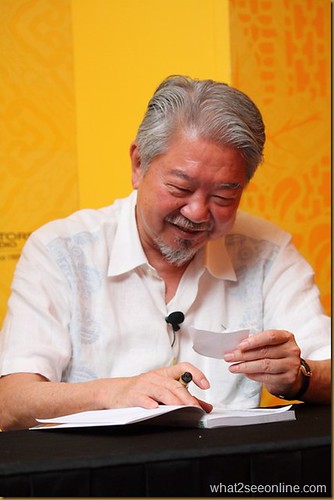 On his special appearence, he is promoting himself for his upcoming event ‘Chua Lam & Friends’ Live talk show that will have some special celebrity guest whom they will be share on their interesting life journey. The two day event will cover 2 different topics one as food critics and the other day will be life as a producer.

This great event will be held on 19th and 20th March 2010, held exclusively in the unique venue at the country’s first and only ‘Theatre in the Forest’ – The Actors Studio situated at the iconic rooftop of Lot 10. The showtime starts at 8pm on both nights.

Tickets are priced at RM 103, RM 83 and RM 63. All ticket prices are inclusive of Lot 10 Hutong food voucher worth RM 20 for you to experience the cuisines critically acclaimed by Chua Lam himself. Tickets are available in a choice of reservations, including online reservation at www.theactorsstudio.com.my from 3rd March 2010 onwards. For further enquiries, kindly contact Lot 10 Concierge at 03 27823566 or Ms Kelly at 03 27103803. 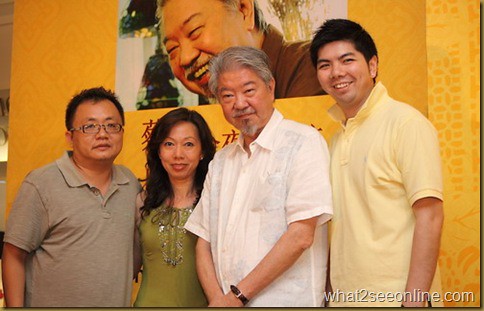 Sidney (BBO), CK, Chua Lam and Me
Thanks to Kelly for the invites from YTL land that gave me a great opportunity to cover this event and also CK for the pictures and info.
Continue Reading
By Taufulou
Recently I stand a chance to party my way with International DJ’s from Europe. With their quality of music it makes me so miss the best Trance locally at Melbourne when I was studying that party during weekend which is after club then head to second session Hard Candy(if I remember correctly) which the entrance located at one of the alley. That was my very first exposure to local scene of Hardcore Trance. Then with yearly event GodsKitchen was one of the best that I can still imagine the scene how all my hard core friends shuffle all night long and chat and drink till the next morning that filled with famous International DJ.

Being a fan of house and not so into Trance but I cannot deny that certain DJ sure know how to spin and stir up the environment with their own mixing that I am enjoying. Of course I do tune in eery night to listen to my favourite house and trance music station Capital FM from 10-1am Daily..Just love their style of music for local DJ and also sometimes special appearence of Internation DJ and of course Jessica thanks for the tickets leiiii~

This M.C Asia Music Factory is brought to you by Global Sound Masters (GSM). With the invited DJ lining up are:

I was there early and manage to listen to our local DJ spinning and mixing it out with AFFIQ.

Partying all they way with all night long~

Then I spotted this, counter to purchase your alcohol~

Next local DJ is FunkoMunky which is one of my favorite local DJ for this music.

Of course me and my buddy Desmond and my brother Jason, funny thing happen to him that night which I am not allow to reveal it out. lol~

and here comes the very first International DJ to start spinning, DJ Marcus Schossow. I just love the flow of the night from the very first DJ till changing to this DJ. Even though not much people but he do really bring the hype up.

I just love his style of music as because its of my favourite. Do not know what type its called but just enjoying myself.

Then there is a cute request by my brother asking me to take a picture for him as he said fast la..seldom got opportunity to stand first row 1..take the moment of me raving and supporting the DJ..

The moment dark out and the DJ slow down the music a little and everyone waiting the moment of the hard bass coming up.

With every one still preparing and waiting

when the bass hit, three of them trying to be like the Zombie in Thriller video clip..

then booty shaking all the way…

Racheal and Wilson, Me and Jessica

Start to slow the music down and now changing tooo………….

DJ Preach…. his style is Electronic Dance Music.. which is also my type of flow..~

Wilson, Me, Jason and Eugene

Overall, on my thought the local music scene still have alot to improve of course cannot compare with DJ Tiesto when they are here but for this 3 great DJ’s with such crowd is kinda dissapointing but what the hell, as long as I enjoy the music~
Continue Reading
By Taufulou
After looking at KL shopping mall decoration and decided to hunt for how is Penang Mall Christmas Decoration, and when I arrived at Gurney Plaza, to much dissapointment the theme is like ‘OMG’, ‘WTF’ Power Rangers?!! SHIT!!! What does they theme have to do with Christmas? When saw it, totally ‘si pek DOWN’.

At least still manage to gain back someting with Christmas Tree infront of the main entrance.

This is the Christmas Decoration at QueesBay Mall, Penang. I guess Penang this time, the mall has decided to go for cartoon and superhero’s character. At least this was not so down compare to Gurney Plaza.
Continue Reading
By Taufulou
Pin It