Usually during lunch time, my colleague will bring me to dine as many places as possible, and Yoke Heng Seafood Restaurant is one of the restaurants that they had introduced to me. I have been here a few times as most of my colleague love this place. During lunch time, this place will be pack with people and it is advice to go early go get quick food and also to avoid the big crowd. 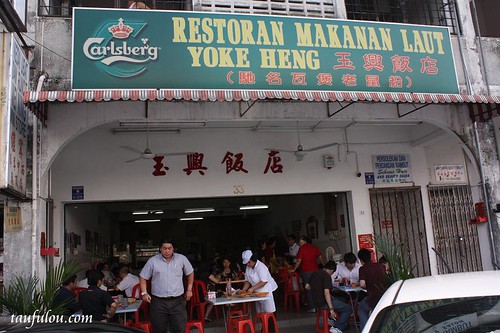 This place is famous for a few signature food that 95% person of the people came here for that food. 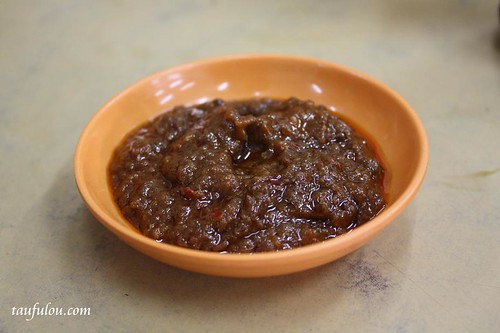 The chili for us to add on during our meal serving.

written by Taufulou
The very last time I travel to this area was my college times, as we visit this place quite frequently for the western food and seafood as we find the seafood was relatively cheap, it was not until last month when my best friend Tatt came down for his business trip also treat us for his birthday before he went back. One thing that I know that the Subang Airport now had transform till very nice and I really wish that on that time it was operate by Airasia when they very first started(for convenience wise). BB Seafood Village

I guess the restaurant that I ate is no longer at the same place as and had move as then I still remember that it was very next to the western food (Papa and Mama Grill). 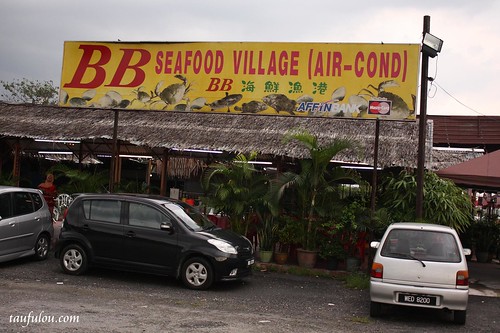 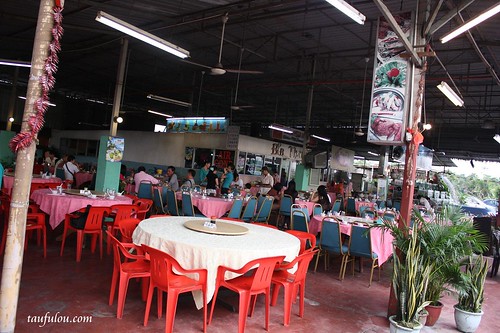 A very classic type of seafood restaurant build with atap and set with wooden and plastic chairs. 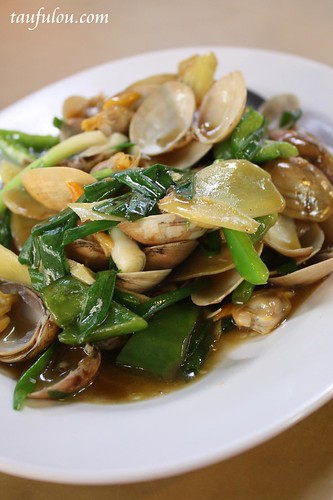 The very first order came by was ‘Clear Fried Clamp’ RM16 which I find it very aromatic with the slices of ginger taste had cover the clamp very well to overpower the smell of it and fried it very nice as we enjoy it very much. 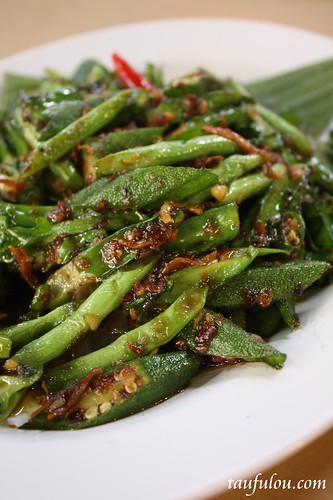 ‘Stir Fried 3 Mix Bean with Dry Shrimp’ that had makes me thought that what a simple dish it is but that proves me wrong always as simple dish is always nice which is very hard to cook, and the vegetable are very fresh with the beans are very crispy, ladies finger is very soft and abit gammy that the small shrimp saltiness is just right. RM 15 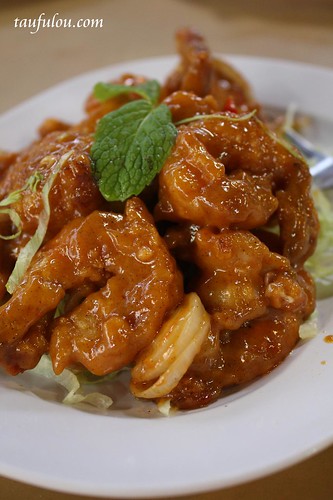 I would say this is the best of all, ‘Mongolian Prawn’ which is deep fried yet the meat in it is very soft and was shower with the abit spicy, creamy and sour sauce on it. Goes very well with rice as every one is fighting for it. RM18 Its good and worth a try. 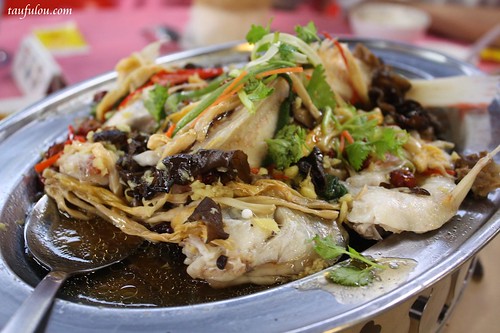 ‘Steam Fish’ fish is rather normal as steam with soy sauce but the meat is soft that shows the sign of freshness. RM24 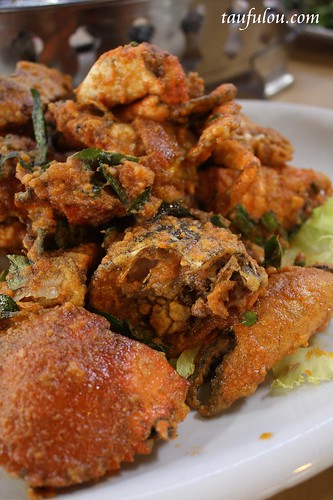 ‘Salted duck Egg Crab’ I have never tried crab in salted duck egg version, turns out to be very shell licking good as I keep aiming to eat the left over small pieces of duck egg and the crab was fried in wok that make it all stick around the crab to very aromatic. RM 68

It was a great meal treated by Tatt as convenient for him to fly off after that and in that month itself he celebrated his b’day more than 5 times.

written by Taufulou
It was our buddy B’day Gay Keong and CB Kenny. They came down to KL to celebrate with the rest of us for lunch, dinner and club 2 weeks ago. So for the lunch it was arrange by my bestie Yeong Yong to head here because of the prank they can put on both of them.

For their lunch they have of course the 2 course meal promotion for RM29.90 which had been going on for quite sometime already which we think the food is not bad so going back for lunchie~ Where you get to choose one dish from the Appetizers and 1 dish from the Entree.

We combine up our order and share share, so the first appetizers is ‘Boneless Wings’ dip with their very own traditional spicy Buffalo sauce. When it was serve, we do not really have the urge to eat because it looks it had been left aside in the kitchen for quite sometime and the looks of it very soggy. It was not spicy and a bit too sour but it dip with the sour cream taste so so onli.

This is always our high time favourite if we do visit here. ‘Fried Mac and Cheese’ creamy cheeses and elbow noodles golden-fried to perfection.

The taste for that day was pretty disappointing. It was well fried but inside, the cheeze was friend nearly dry and the elbow noodle was totally dry where you put into microwave to reheat your food where usually we it, when we cut it, its pretty cheesie and flowing down to the plate~

Next is the ‘Clam Chowder’. Which is find its the best compare to the other 2 as it is hearthy, creamy blend of celery, garlic scallion and potato lightly seasoned with pepper and rich with clams.

The soup is creamy and the ingredient in there is blend of celery, garlic scallion and potato lightly seasoned with pepper and a bit of clamp. But overall, it goes pretty well with the taste. We were very happy of this appetizer. The rest.. *shake head.

After our disappointing appetizer and cross finger to get a better 1 for entree. The first dish is ‘Sizzling Chicken and Cheese’. It was very appealing at first but the taste of it was not as expected to what is on the description and the thing is, the portion is seriously small. In this pic might look big because its taken near. If you take the piece of chicken breast and compare it with my stomach its like onli 1/4 of it. The mash potato is a bit tasteless, onion was not deeply fried, the chicken breast is overcook. Hopeless dish again!

Next was ‘Cajun Shrimp & Chicken Pasta’. One of the okay dish of it as just ngam ngam creamy, after you stir it the sauce is gone, it got ‘serap‘ into the fettuccine. Theeere are a few pieces of chicken cubes and shrimps. Nothing much to comment on.

Follow by the ‘Jack Daniel ‘s Chicken’. Haiyoooo, tis is by far the best of all, the chicken breast is grill just perfect, a bit golden brown, the breast is soft wont be so meaty and the sauce that pour on top of it, is just so good that every 1 of us have not enough and thought of ordering another 1.

The next dish that serve is ‘Fettuccine with Chicken’. It was abit dry but the taste normal. The chicken stripes were quite generous and okay lah…don know what to say.

The last of the entree would be the ‘Club Sandwich’ if not mistaken. This is one of the best dish of the day. The bread is toast to perfection till the crust and outer layer of the bread is crispy. The bread in the middle is soft. They were never cheapskate on putting in the ingredient, the breast meat is alot, some bacons, mayo, cheese and other’s with the sauce all added up, can just saviour it instantly.

After eating session, I was fast fast told to arrange to deal with the manager there to give them a surprise. After they were clearing the table plates away then a few minutes after that, suddenly a group of ppl sweep across by their table and surround them. They were told to stand on the chair and to introduce themselves to every 1 of us…They si pek sporting, directly jump onto the chair…So let me intro for you, this 2 are our Birdie Brithdayyyyyy Boi~ Gay Kiong(in white) and Chan Tou Nam Kenny.

Then comes the supervisor to brief them…’Lai lai, now u guys have to use this salt and paper bottle to treat this at the mic. Then you have to either, share or sing to all of us. Ah Keong was like, an chua.. let me go first laaaa, you better say later la..si lang Kenny.!!’

So there goes gay keong(actually his nickname we gave him) talk talk talk and bla bla….

Then here comes the gay Keong performing, as we told Chan Tou Nam better not, cus you are too fat, later you broke the chair we have to pay. So he is the pole and Keong, perform his best…

Making the crowd go while. All of us was like going crazy..with gayness keong swaying so sexy..
lol~

Then the manager told them, not yet finish…..In order to get this complimentary cakes, you guys have to do 1 task. You guys have to blow the candle from the distance we placed.

After announce, Keong was like ‘Oh SHIT!!..How to blow? Kenny no eyes see…

We were all like, blow la blow la..got free cake eat..at the same time pity them also, have to blow till their face ‘bin che che‘(hokkien) – face green green~

So before all the blowing get’s going, so they Birthday song singing….

Follow by our very birthday wish tradition. We at the bottom there helping them say Keong – I want to be Sushi King and please give me more idea of how to be more gay if needed. Chan Tou Nam – how i want to grow my stomach, don want to be Chan Tou Nam, want to be Santa Clause.

First attempt, sucking all of the air in and trying it for 1 blow…no effect….if for me, I’ll faint.

Keong is more daring. Like monkey directly climb accross nearby and blow it in 2 attempt.

This is what we manage to get, a complimentary cakes by TGI for Birday Guy/Gal. If you were to celebrate your birthday there, please do not ….I mean please do not miss this piece of cake. It is so addictive that from your first bite melting in your mouth with the chocolate, the ice cream, the cakes in it just bring you the satisfaction. The best of all!!! Don know what is the name called but its highly recommended.