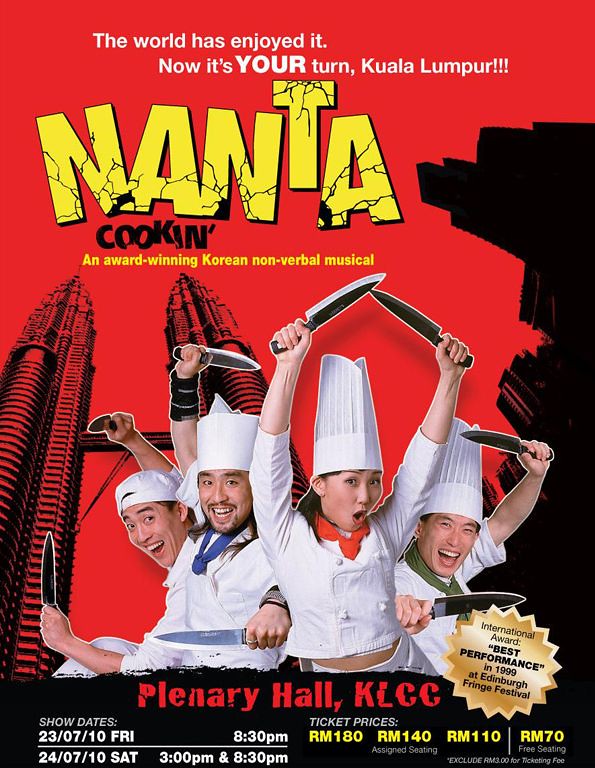 written by Taufulou
Kota Damansara had recently had become one of my hunting ground for food. With a lot of restaurant, kopitiam and café’s mushrooming around the neighborhood, one thing I can say that their food in that area so is so far so good until I got expose to this small shop in the area. Famous for its seafood and its fried hot wok dish and among its local neighborhood, the taste had even attracted stars as far as Hong Kong to dine in here at Mei Chi Xuan Restaurant. 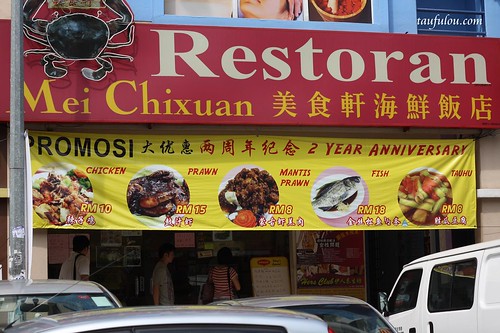 The shop is located in the heart of Kota Damansara. 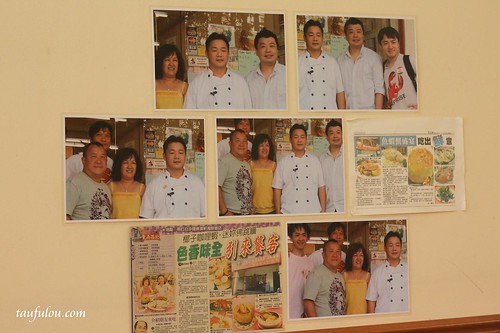 This is what I mean that the shop had attracted crowd from far with the Hong Kong Starz in Super Trio show had dine here before yet Hoh Chiak local tv food hunter had featured them too. 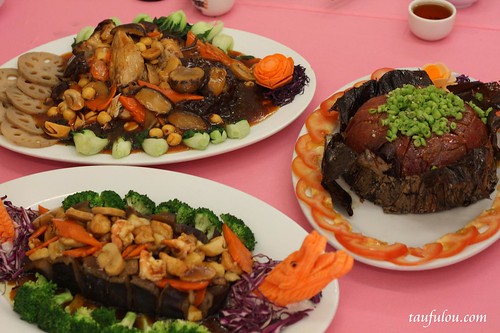 Here we are, to try out their menu specially made by the chef for Chinese New Year.The chef want us to do photo shoot session first as I cannot wait to eat it. The aroma pilling up the room is just full with temptation. 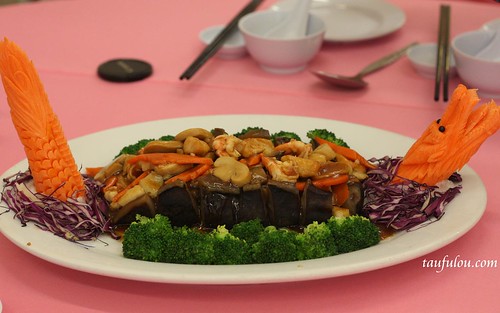 ‘Sea Cucumber with Seafood and Mushroom on a Dragon Boat’ had already amazed me with its very original food presentation. 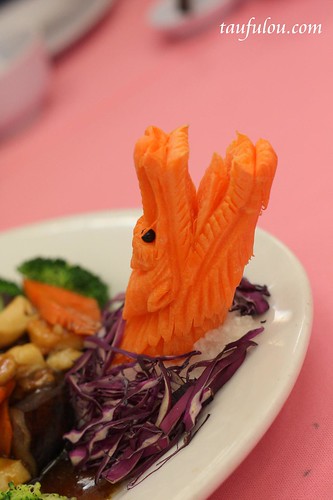 Carefully crafted dragon head and tail with the broccoli decorated by the side and the rest of the ingredient sitting on top of it make it look like a floating boat. All of us were so impress. I always thought that only can see what those TV cooking show chef can do but never really on a local restaurant like this, which is not even a 4 star restaurant. 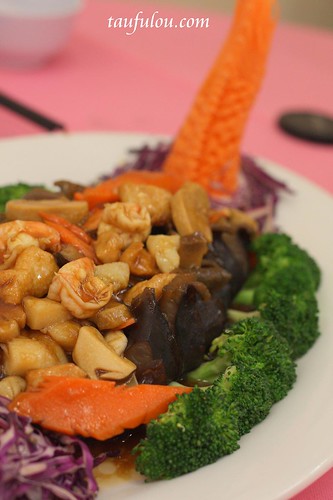 Filled with chewy, juicy sea cucumber, scallop, prawns, mushroom, carrots and make the aroma blended so well. Broccoli was freshly cook to my likings. This dish was cook for the reason healthy eating. (from RM150) 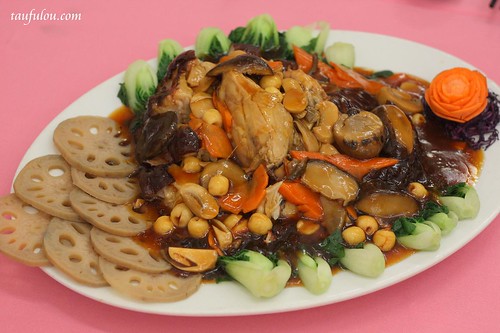 ‘Braised Pork Trotter with Mushroom and Lotus Seed’ (RM28 onwards).The pork trotter was cook to perfection until the pork meat is soft, yet not too starchy flavorful gravy that shower upon covers over mushroom and lotus seed, yet by putting one small piece of the fats will just melts on your mouth. 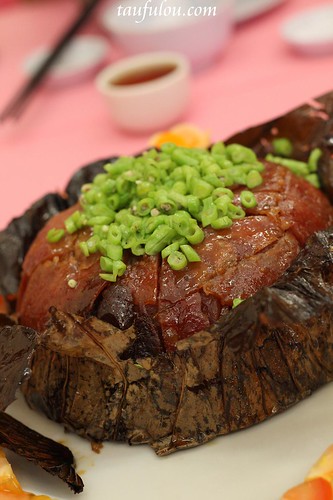 ‘Brown Rice with Waxed Meat and Egg Yolk’ (from RM50) 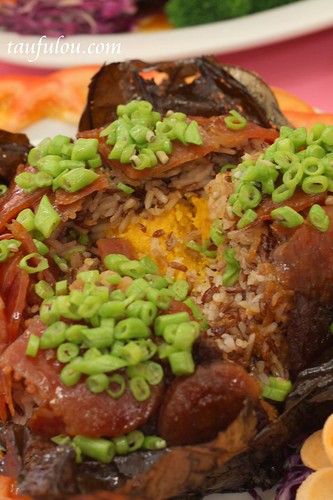 Last dish had attracted me more on the taste as when it was serve, the aroma of the wax meat smells so niceeee~ . Not till the chef mention that, let me show you the hidden jewel, and when he cuts open, is like you seen in the TVB cooking drama series, when it cuts open the aroma just burst out even stronger and then the salty duck egg yolk was hidden in the middle like making it shining (I meant tvb style) but this gives me that kind off feeling yet you can smell the saltiness yet strong nice fragrance of the dish that makes us just want to walap the whole plate.

The rice is fried till just nice which is not too dry yet eat it with the wax meat is just perfect combination and the salty egg yolk just adds on the extra kick of it.

It was a great experience in this shop and I am surely looking forward on their normal menu which other customer had order and I can even smells the taste of it when I walk pass to toilet. Just lovin it~

written by Taufulou
An International star Chef had landed in Kuala Lumpur recently and would be his virgin trip. A person who starts to cook at a tender age of 12 and have more than 30 years of experience in cooking show and host more than 1500 episodes in his career is here to give a live cook show. He is Chef Martin Yan who is quite well known to most of us during back in the early days as alot of people are aftering his show YanCanCook if you still do remember. He is also one of the pioneer for a Chinese to penetrate into US market in cooking shows that have now make him internationally recognise.

I have always watch cooking shows on TV but never in my dream that I was privilege to attend this exclusive event that host at GE Monogram Kollektion.

The kitchen utilities is impressive and specially set up just for the show.

A simple ingredient that prepared and ready to be used for the chef and just by this ingredient just sit back and see what the chef can surprise you with it.

Another sponsor Lee Kum Kee and others for the event that Chef use for cooking.

and a friendly Emcee that introduce all the sponsors and the event flow of the day.

Being a local favourites, Chef Sun is his assistant for the day. During the introduction, I am very amazed and very into Chef Martin Yan with his energy and with his great sense of humour that keep making all of us to laugh. I am also impress with his passion in cooking that he is so into it that, what I think a chef must have.
With his age, and his vase experience, his culinary skills is still so impressive especially on slicing a green peper. He can just use one slice of it and slice it into many many thin slice.

Then he thought most of us how to prepare a simple dish yet easy to prepare and fast at home. While Chef Sun was cooking, I am already hungry and waiting eagerly what had the chef is cooking.

The two simple dish of the day was ‘Prawn in Salsa Sauce’ and ‘Black Cod Fish in Salsa sauce’. The taste is amazingly good. Something simple yet unique in taste and still preserve the freshness of the ingredient.

Then the chef tell about his experience and what are the do and dont’s which he keep mentioning If Chef Yan can do, you can do it too..If Chef Yan can’t do it, then you better don even think of trying.

At the end of the show, me, Sunny and Xin trying to be the chef wanna be also…trying to get the feel of it..keke

With Chef Sun and Chef Martin Yan
Then proceed with the lucky draw, I just did not know why for the very first time I am quite disappointed that did not get it.

It is a marvelous event to see him how he spread his love in cooking to public that I must thank to Sidney and GE Monogram for the invites without you guys, I could not witness this great cooking show.