Yesterday was a big derby match with Man U vs Man C 2011, with this season, Mancini squad had rebuild to a great level with strong striker and solid defence that they have, by far both team are on form with many people turn out yesterday night as a supporter of the Devil. As for me, I am on neutral side, just enjoy watching big football games with my brother a Devil fan. 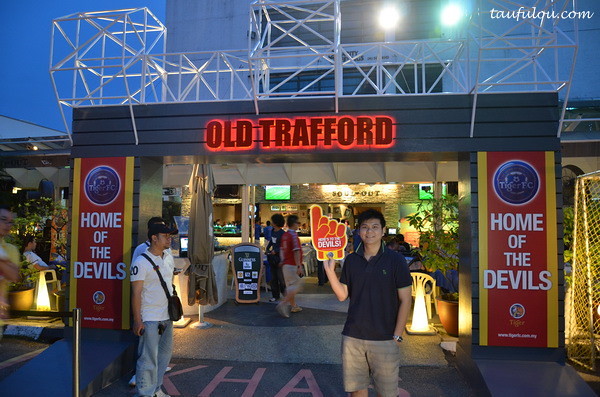 With this big game, Tiger had turn Soul Out into a mini Old Trafford Stadium ground with the home of the devils, is where alot of devil fans came by to support their favorite team. 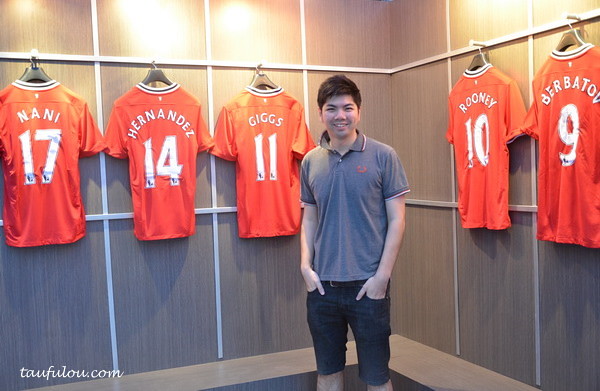 they event have dressing room for the players and for you to take picture. . 😀 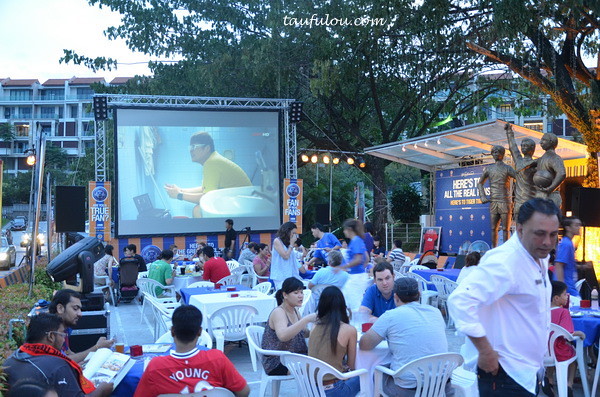 the other side of outdoor area had been transform into a fans ground with giant television for fans to cheers and support and stage are build on that area too. 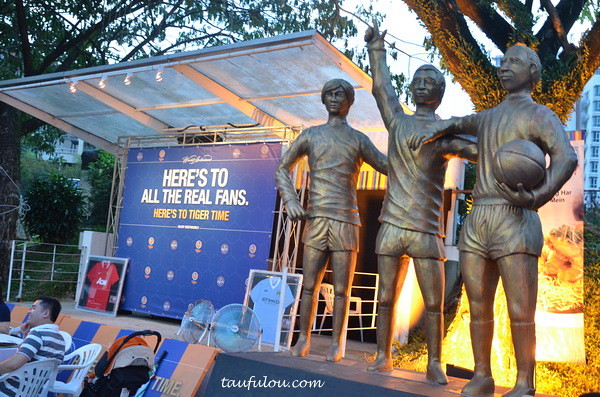 They even have the look alike bronze statue during George Best era are in place. .. 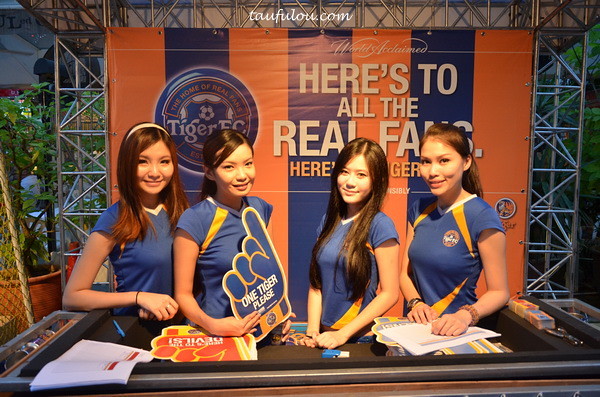 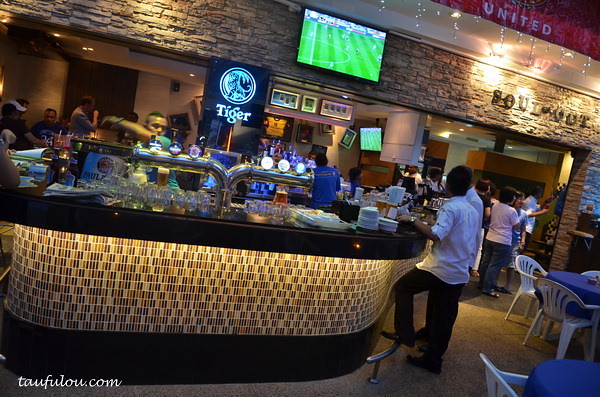 I always love Soul Out as it used to be one of my hang out joint when I was back in College and till now they standing tall and strong! 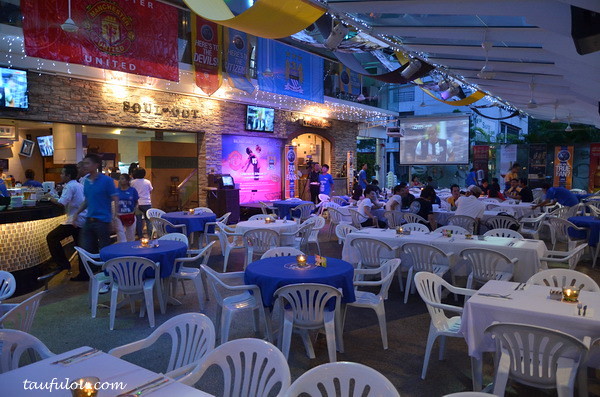 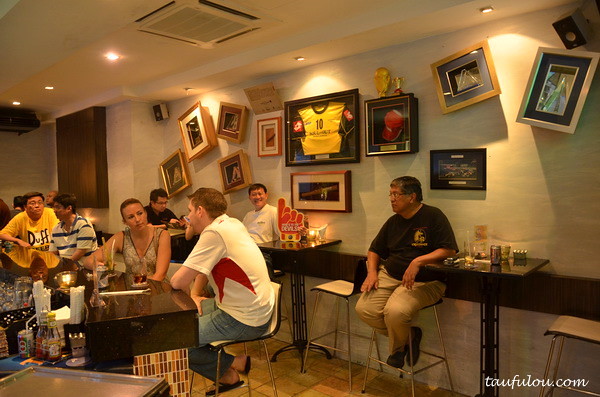 Fans came in early to get their spot in the bar area. . . 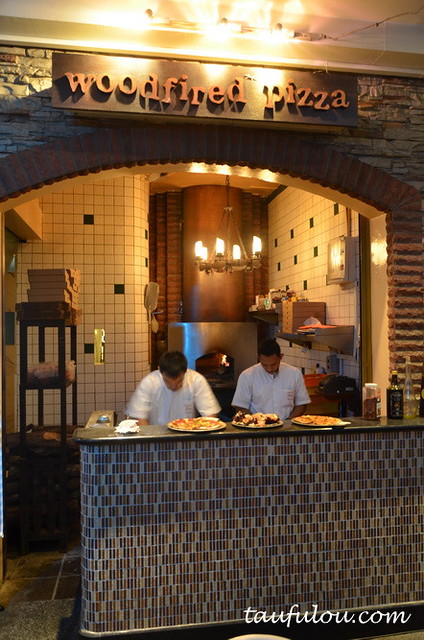 If you are there, do try out their wood fire pizza which is a pretty good choice that hardly go wrong. 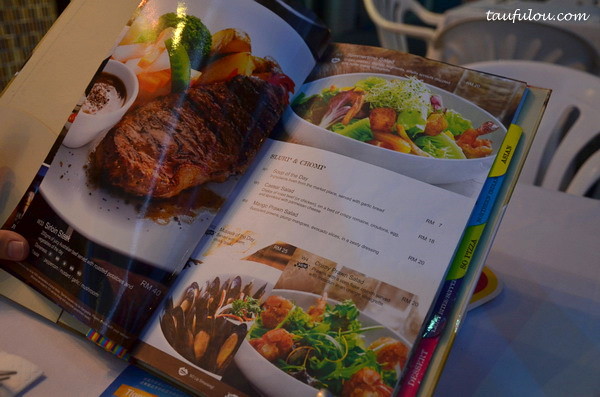 They have change their menu already . . . 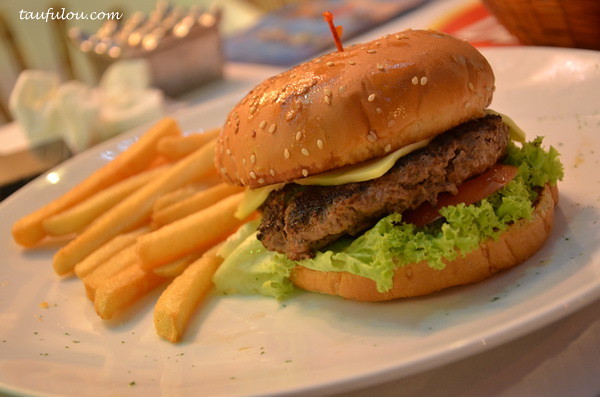 Classic Home Made Beef Burger @ RM 16 as the patty might look dry, actually it is not, whereby it is moist and juicy enough that turn out to be one of the favorite order for the night in our table. Well grilled, to medium and I just add in some mustard and chili sauce is perfect! 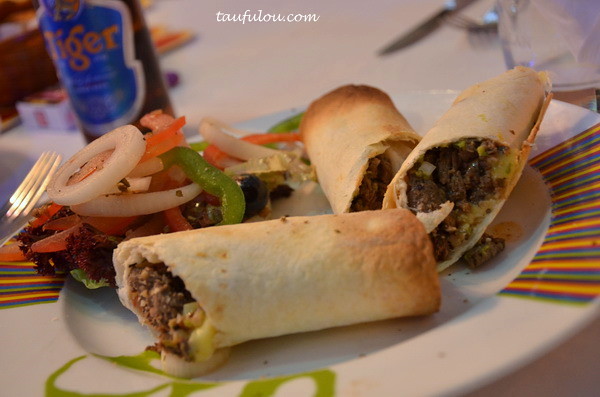 Fajitas Roll @ RM 16 as the mince beef is a bit dry and the cheeze is not enough, it tasted so so only. 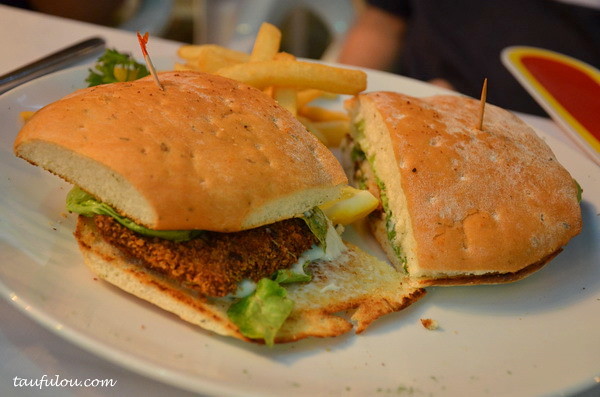 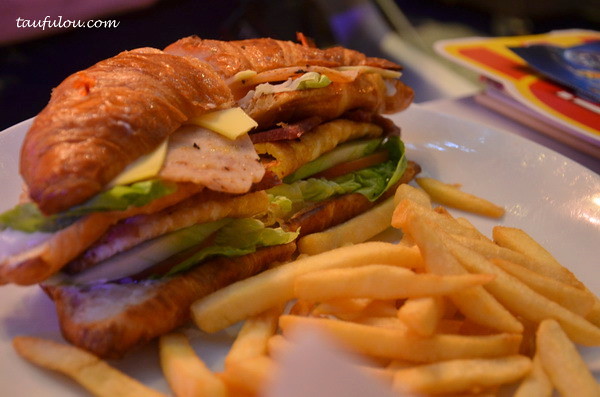 This is another quite a nice dish for the night as Croissant is filled with lettuce, ham, egg, cheeze is one of the dish that can get me satisfied. I do not mind to have another plate of this. 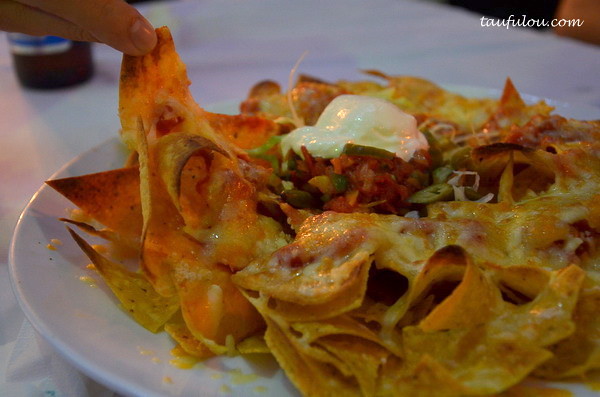 Cheeze Nachos @ RM 18 is a very huge plate and when it was served, Joshua me and friends were stun for a while, with the size of serving, its well worth it, and the amount of cheeze added in and gravy is just enough to dip along. 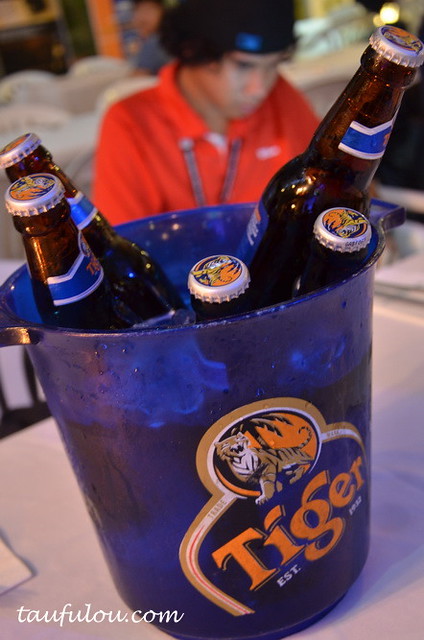 Of course we need Tiger Beers to stir up the mood. . 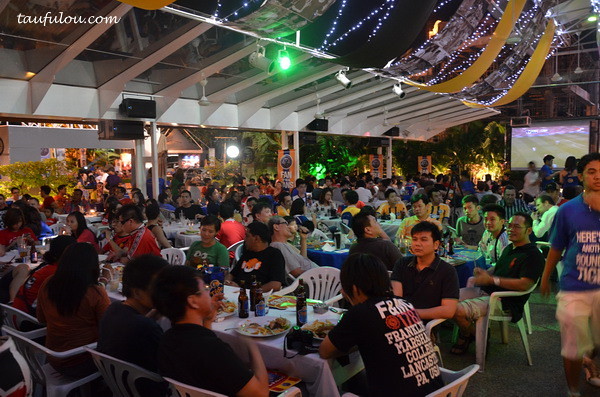 It was full house that night, many cheer for their favourite team and obviously Man City player went back with joy as Man U got trash at their home ground, which they have went 19 games without defeat since last year 2010 and Ferguson consider one of the worst game in his care on his rival games. CAnnot deny that Man C went riot and took opportunity when Man U left with 10 players and for the last 5 minutes Man C score another 3 goals.

Overall, Man U played far below par than they actually do and Man C just took the advantage of it as for now they are 5 points clear at the top.

Enjoy the highlight of the game.

Quite some time ago, when I started to work in KL one of the fast food chain, Carl’s Jr caught my attention with their whooping delicious burger pictures that I got seduce into and it was not until recently all of us decided to go for a feast at that fast food outlet. 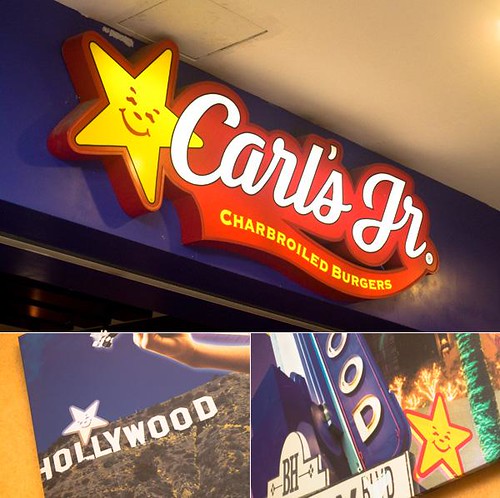 What I feel that their interior portray classic American style concept that decorated walls with burger’s pictures. 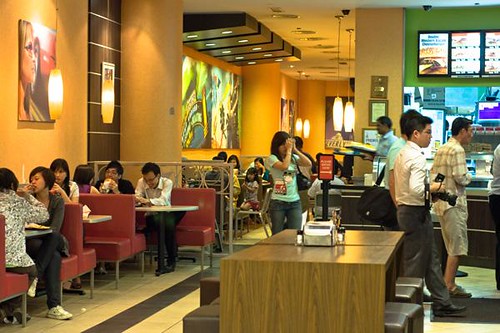 Founded by industry pioneer, Carl N Karcher, Carl’s Jr. ® restaurants have been a U.S. favourite for more than 60 years. With more than a thousand restaurants globally, Carl’s Jr. ® has gradually been known as the place to go for juicy, premium quality charbroiled burgers.

A burger from Carl’s Jr. ® is a “true blue” American-style burger. Made with fresh quality ingredients and overly wasteful preparation methods, the intense flavour explosion will top your taste charts. Not only are our burgers huge, juicy, and messy, they’re also totally satisfying. We think you’ll notice the difference.

Everything in Carl’s Jr. ® is made-to-order. Signature items include the Portobello Mushroom Burger, Superstar® and the Western Bacon Cheeseburger™.

Not forgetting other favourites like the charbroiled and crispy chicken sandwiches, entrée salads and low-carb selections. In every store, there is also an all-you-can-drink beverage bar and table service just to make every visit a little more thoughtful. So, what sets Carl’s Jr. ® apart from the rest is the high quality. In our ingredients, preparation and service.

What keeps our guests coming back for more are our great tasting burgers. We’re pleased to finally be able to satisfy the hunger of quality-conscious Malaysians who have been craving a real, juicy American-style burger. 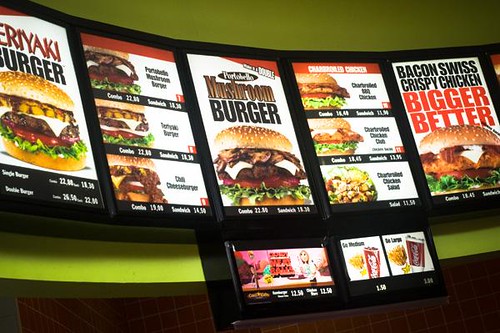 These are the pictures that caught me into. 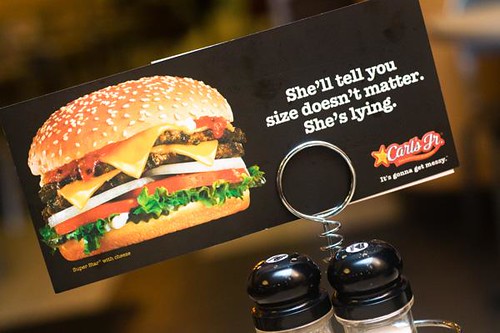 Well, most people would agree with this term when ‘Size Does Matter’. . . . 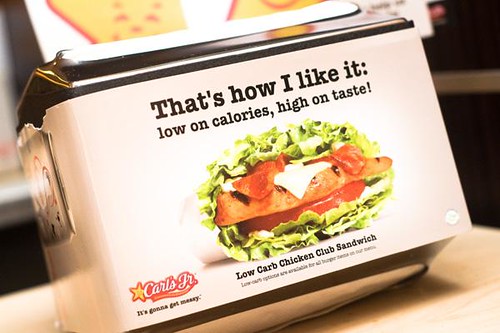 One of their speciality is that, they are doing fast food with health conscious in the line that people can enjoy eating healthily. 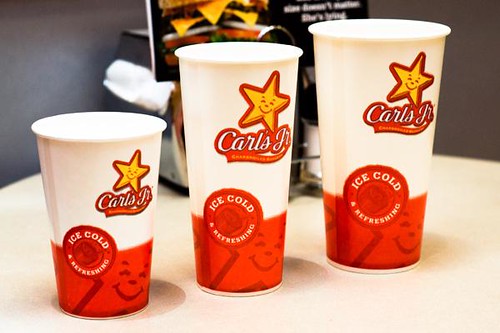 One of the matter that size does matter to us, weather our stomach can fit all those. 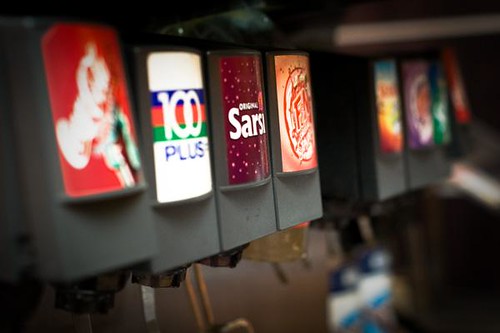 Unlimited refills that you can go after. . . 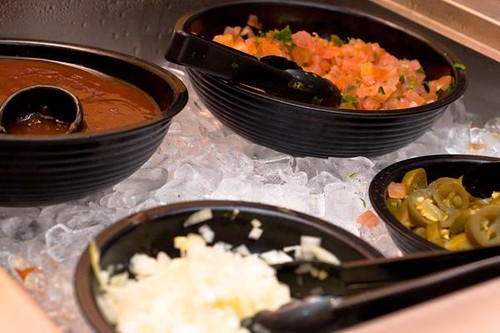 One unique thing that we can get at Carl’s Jr is that they do have their own mini ‘Salsa Bar’, if you feel that their burger is lack of taste or not juicy enough, then you can create your own style.