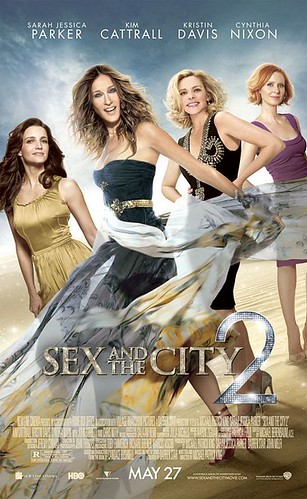 During the first movie was out, I did not realise it was a good movie till most of my friend told me its good and I also rejected my best friend to watch this movie, till I told her I am going to watch it few weeks later, she is not happy. . . First part of the movie turns out to be good and I watch it twice that I find Mr.Big so damm yeng for his age(wish I am like that when I am around his age) 🙂

This movie is a pretty long movie about 2 n half hours, this time they did not talk much about fashion instead talk alot about relationships, and the best part is they showcase Abu Dhabi till so yeng and very modern. I love the world they called it the new Middle East.

Overall, I still find part 1 better than 2 but no complain that its an invitation from Skyy Vodka that I attend previously that got this exclusive invites, that had a cocktail party before it start.

Over all this is not a bad movie, but guess what, there are some people slept in side cuz its a drama/Thriller movie. Maybe it was late show. Those of you who like to watch alot of talking and learn some about teorrorist activities, this might be right for you.
This movie is about terrorism that happen in Iraq the mastermind that gonna blast U.K and U.S afterall. Leonardo Dicaprio was send to Middle East to spy and gather information on the terrorism activities that had been planed and use not electronic devices to communicate with their associates around the region. As Russel Crowe is the person running the whole operation in Middle East by using satellite to spy the operation. After certain terrorist activities, Then Dicaprio come up with an cunning idea and had planned a similiar terrorist attack in order to lure the main terrorist suspect to be reveal. He got captured and Quite interesting story, as the Jordan Special Intelligent force was very smart as they corporate with Dicaprio. I like that guy and how the Jordan special Intelligent force handle the whole situation. Different way of influencing the person to work for him. *SMART
Well, again, Dicaprio in this movie speaks well Arabic language as previously in his last movie I saw Blood Diamond with his accent in there. I am satisfied. A 2 hour movie.