A few days ago, we went back again to Hai Thian restaurant in Equine Park for a feast again. It was one of the post that I had forgotten to blog about it, that I manage to find back the pictures and now it is a combine post of both event the first one was after Chinese New Year we came here for lou sang and second time was few days ago to celebrate Kebbie’s Birthday. This is regard as one of a recommended restaurant by my colleague. One of the reason I did not blog about it as I do not have the receipt, therefore the name in here is base on my own estimation.During my first trip to this restaurant, I find it very far from my office as it is deep inside Serdang, but when I reach the restaurant I was shock! to see the restaurant occupied half of the stretch of the shop lot, might taken up around 5-7 shop lot to convert it. With the effort, I have rated it as dont play play restarant as it must be a standard to be able to conqueer such a big place.As some information from my colleague as this restaurant is very famous and they had just move to this new premises, as during on the old location, it is always pack! 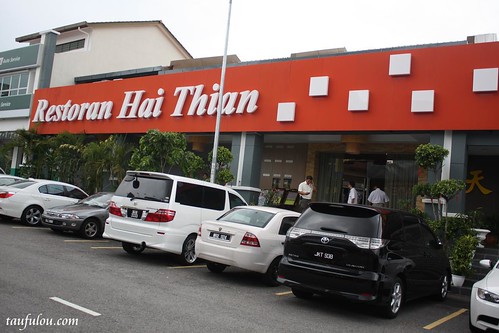 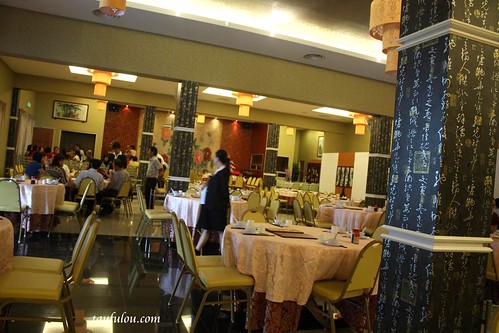 A modern interior with some Chinese calligraphy printing on the pillar, with high ceiling and a stage, occasionally a lot weddings are held in this restaurant, based on our estimation, it is able to cater up to 80 tables. 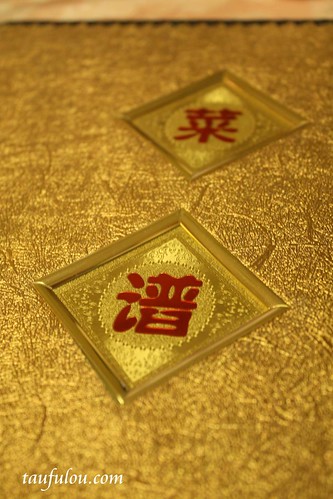 The menu is heavy and the pricing in here are very reasonable. 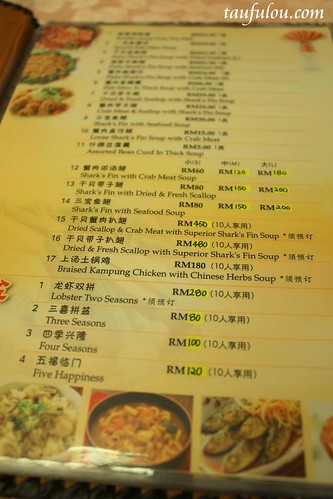 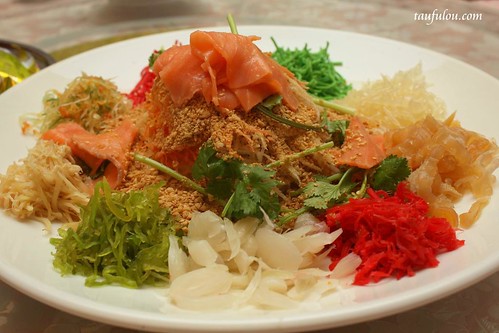 For the first round when I was here, we had ‘Salmon Lou Sang’. 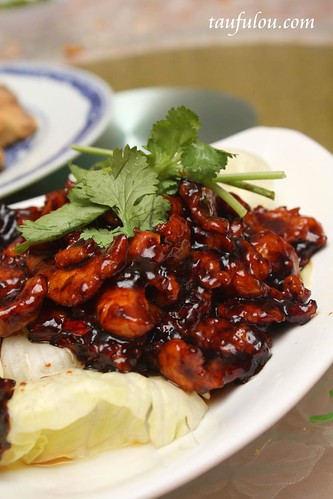 ‘Chicken Fried with dry Chili’, the taste is absolutely fantastic, fried evenly that the chicken is soft and tender yet the sauce that fried along in it makes the aroma stick on the chicken that the gravy is sticky. 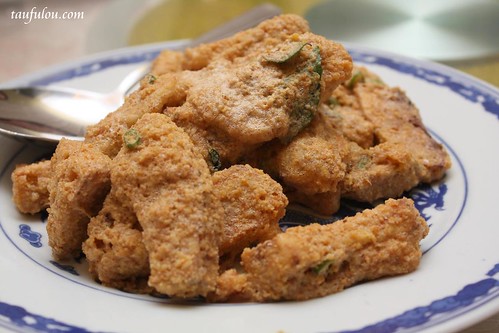 I have eaten a lot of salted egg crab, pork, chicken and others but I have not tried before ‘Salted Egg Pumpkin’ as it turns out to be very good. The salted egg had been finely chopped till its like sand and pumpkin to fried along with it, is just as good as it is. 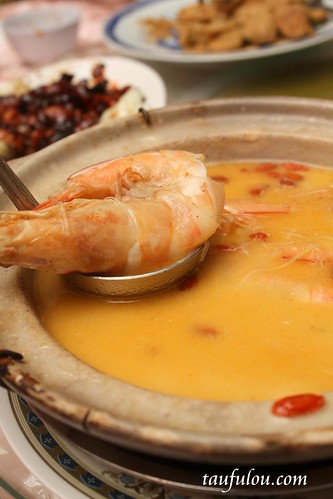 ‘Chinese Herbal with Prawns and Vermicelli (tang hoon)’ when this pot came over, it was finish within seconds and not enough that we order another pot of it. The soup is very aromatic with chinese wine that did not overpower the herbs taste, just the right amount and taste is very inviting. 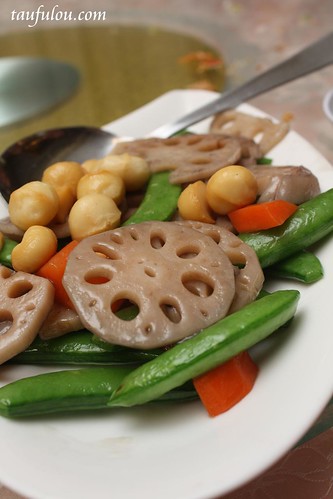 ‘Fried Lotus Root, Chinese Pea with Macadamia Nuts’. Fried with wok hei that maitain the freshness of the vegetable and the ingredient of Macadamia nut add the extra umph in it. 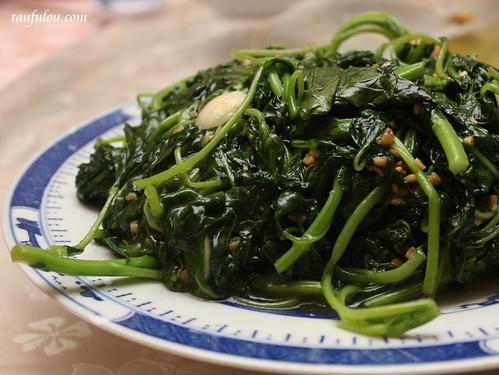 ‘Fried Vegetable’
Continue Reading
By Taufulou
Yesterday when I went back home, and reopen the folder that I am suppose to blog it out and I got a bit shock as I am far behind to update. I have been quite busy lately, will try my best to update as soon as possible.

Went to Brussels bout 2 weeks ago and I got shocked!

The very last time I walked passed there Brussels was only like conquering the place nearby its pillar and now, nearly to Starbucks territory. Did not know it had become such a happening spot or I am just outdate.

Just like all the people there, I will be one of their regular customer soon as I brought my best friends there and just realise not only they offer our favourite beer Hoegarden, they also offer alot of international beer. Not like those Heineken more like German,Irish, Australia and many more to name it out. Wide variety.

Get to know Hoegarden when I was studying in Melb. This bugger called me and told me that how good is Hoegarden this and that few years back. Then after hear her talk till so good, and during dinner also went to find some bar and pubs see any of those places serve this. Then till one place, called Long Room @ Collin Street opposite Polo shop and Gucci shop nearby. After found that place and it had become my favourite hang out place. Was 4 years back.

This definitely one of the best beer to have. Around RM30 after added tax and service charge. For those people who do not like to drink beer, this would be highly recommended. ‘Never try never know. Once try hari hari mau‘.(new quote that I learn)
Location:
Brussels Beer Cafe
L-20-G, Block L,Jaya One
No. 72A Jalan Universiti
46200 Petaling Jaya
Selangor Darul Ehsan
Map can refer to the official website JayaOne
Tel: 03-7954 2000
Continue Reading
By Taufulou
This was my tradition to pray here every year during Chinese New Year to wish for a smooth and better year ahead. I wasnt being superstitious but old people teach. Just follow. Wanted to post this up because I am proud of this temple, as this Kuan Yin statue was fully funded by citizens and tourist who visit here. It took about near 10 years to build this whole thing up as it was slowly funded years by years. This year I have donated a titles of roof plate which is RM30 the smllest. You can write your name, make your pray wishes and your name will be up there forever as they will put a layer waterproof syelek to have your name up there as long as possible. As what a quote we learn when we are young ‘simpan sikit–sikit, lama-lama jadi bukit‘ .
It first started to build the statue, and was there for very long time to build the pillar as not enough fund until 3 years ago. Till today it was near completion as was told by the Auntie, it would be complete by mid of this year. Really looking forward for this statue as the roof was the final piece of whole project. To covered the ‘Kuan Yin’ from sun and rain.
When it completed, it would be the South East Asia biggest Guan Yin statue. It has already attract tourist from near and far every year. As this whole temple was light up during at night during Chinese New year. It was sure jam like crazy to go up visiting at night. Be sure you go up at 7pm to avoid the jam.

The area definitely have the feel of like those in Taiwan, China or Hong Kong.

This is the lantern as what they said that you are not in the luck for the year or the light around you is dim, write your name and hang it here, will make your light brighter for smooth sailing for the year ahead. As different zodiac has different luck in the year.

I see some of the tourist put or stick their coins in this small little fountain and make a wish.

This is the scenery of the temple from the mid of the mountain. Whereby the Guan Yin statue looking at. As what they said part of the god to take care of the island as what the auntie told me.