Weeee, at times some friend commented that I acted like a small kid. Well, what to do when it comes to some of your favourite things that you like sure you gonna be excited. Since I have miss out last Hennessy in Penang and now here comes the upcoming one that gonna be held at KWC level 15 on 8th September. 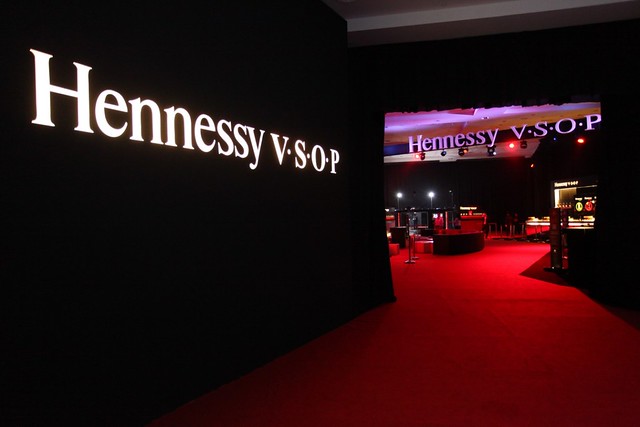 It was the first time that Hennessy did such a big scale event on the north by putting its feet on Penang that made it so happening with many of my friends in Penang had a blast including my sister. She said one of the best event she had attended so far. 🙂 The event took place at last June at Straits Quay Convention Center that they have converted the whole place into a main party place. 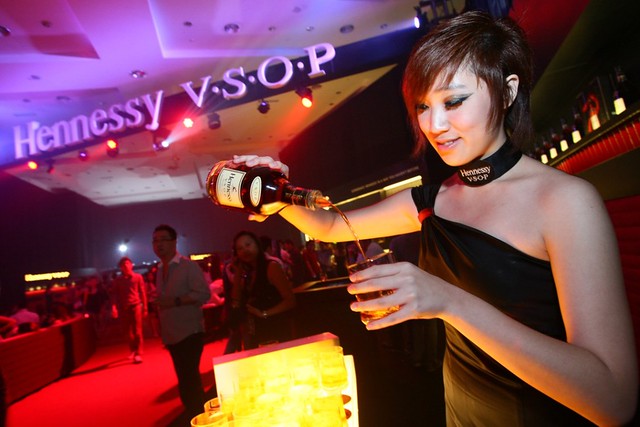 Penangnites enjoying their free flow for the night . . . 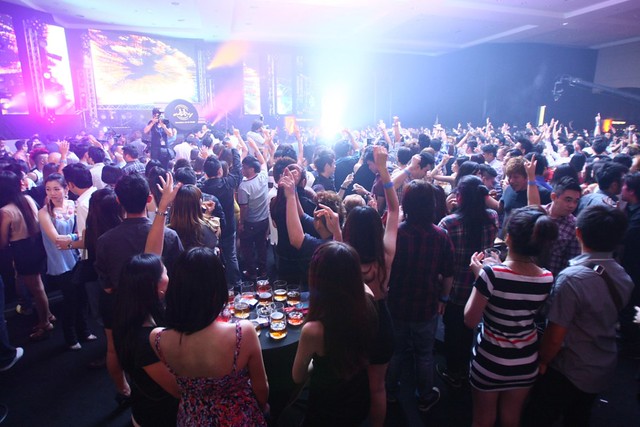 This is how most of them had a great time~ 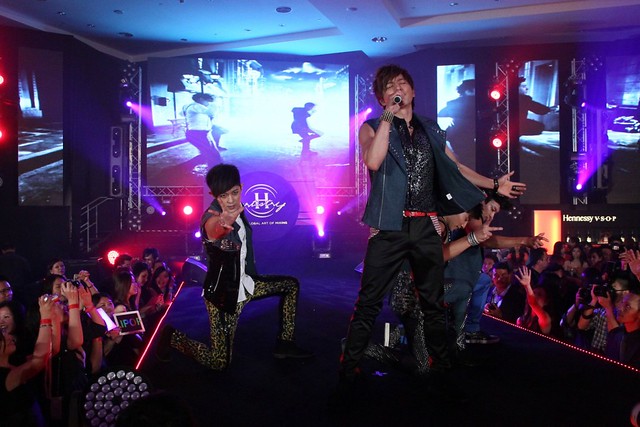 Then guess what, with second installment of H-Artistry 2012’s Global Art of Mixing Trilogy that will promising an eclectic mix and a phenomenal super-clubbing experience. I  just cant wait for that. Not only that, as this round we will be treated again with their super cool 360 Cam, as well as other interactive party elements; making it one of the premier party experiences this September. Right after 360 degree panoramic video at the Hennessy 360 Cam, party goers can enjoy their favourite Hennessy V.S.O.P. long drinks at the Hennessy Mixing Bars, where Hennessy Apple, Hennessy Berry, Hennessy Ginger and Hennessy Soda. 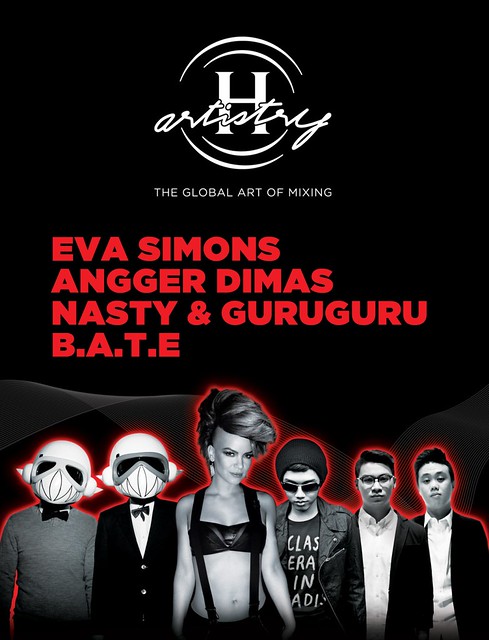 As always, H-Artistry will always have a superb line up for you and with these few are being line up for us along with international vocal powerhouse and EDM (electronic dance music) siren Eva Simons, Jakarta’s cult-status DJ Angger Dimas, as well as Kuala Lumpur’s fast-rising electronic dance nu-breeds B.A.T.E. (Brain And The Eye). The night will charge on till the end with the hard-hitting, hipster-worshipped duo Mr.Nasty & GuruGuru (a.k.a. Bass Agents). 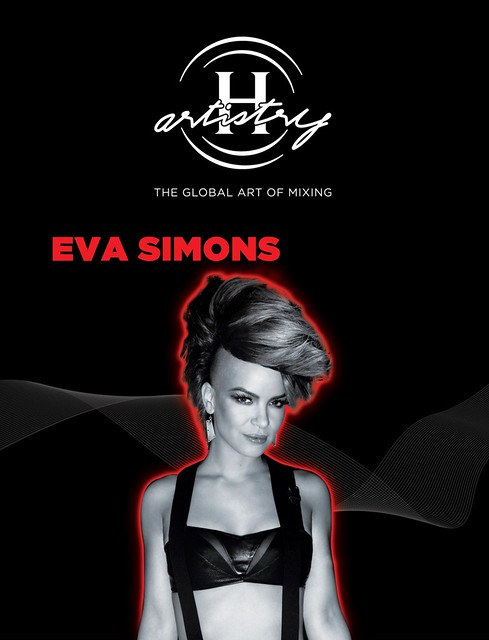 Lets start off with some one that most of us know, that I often blast some of her songs at home below:

I am sure now you know who she is. 🙂 yes, no stranger than Dutch vocal powerhouse and EDM siren Eva Simons, that will be appearing that night. She has come a long way since her beginnings. Back in 2009 “Silly Boy” was the first track, then gain popularity on the net that gain attention from Kanye West. Since then she sign a worldwide record deal at EMI, which led to even more notable records from her up to mid-2010. Some of her track that top on the chart are “Take Over Control” , “Best Night” and her latest single “I Don’t Like You” under Interscope Records will surely blast all of us that night. 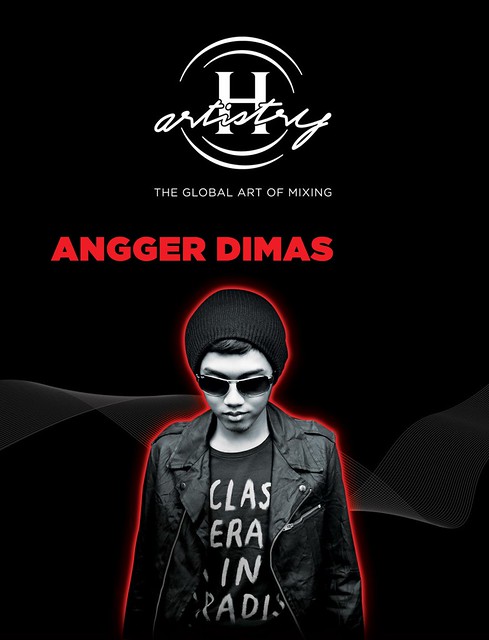 Next check out this young lad from Indonesia that had made its name for party scene in South East Asia is 24 year old Angger Dimas another young DJ-ing talent from around the region. His pursuit of creating electronic dance music (EDM) began 3 years ago when he debuted his DJ-ing career in 2009 that landed him a record deal with Australia’s mighty Vicious Recordings in early 2009

Dimas’ debut release “Duck Army” has been played by the likes of Tocadisco, Joachim Garraud and Laidback Luke, while another Dimas track entitled “She Got It” was dropped by Sebastian Ingrosso as his opening track at the famed “Sensation” event, in front of a 20,000-strong Melbourne crowd. Dimas’ tracks are often included in the playlists of David Guetta, Chuckie, Armand Van Helden, Steve Aokie, Laidback Luke and Axwell. 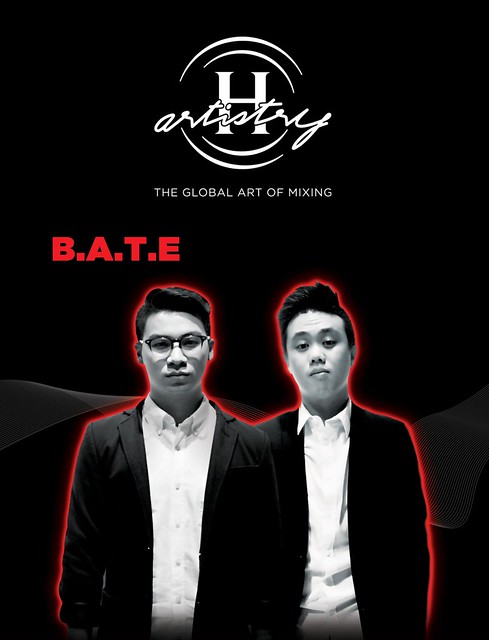 weet weet, usually in this event, definitely we will have our own local talent as this round they are featuring 2 group.

B.A.T.E., made up of local duo Wai Hong and Ethan Curzon, are two fast rising nu-breeds aspiring to be the next big DJ duo in the local scene that pretty well known for their style in in Disco, Techno, Big Room and Electro. They are usually spotted various nightspots around the city such as Barsonic at Zouk, Vertigo, LUST, Bakita and Bedroom. 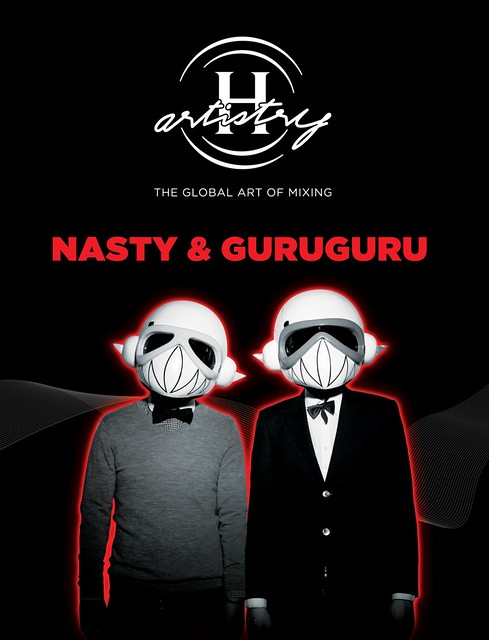 Nasty and GuruGuru a.k.a Bass Agent

This duo spin pretty cool track that is also no stranger to me, that if you do party at Barsonic, Avant/Garde at Vertigo  which is well know for complex and edgy lashings of electro, hard trance and hard style. The Bass Agents will be hitting the overdrive button to make party goers that night to lift their feet off the ground.

If you wish to get your invites to this event, on this September check out for more information: www.h-artistry.com.my.

H-Artistry is open to those above 18 years of age and non-Muslims only.

Few days ago went to Absolut Vodka event that held in Ecobar. A event which is truly unique by itself. How many of you have not heard about this brand before? Well, usually I love to see the shelf of Vodka in airport as constantly they do have their limited edition bottle of flavour, and I do collect their limited edition if by chance I came back from travel, till date I have collected 7 different flavours and bottles. Besides that, its one of the world’s best selling international premium spirit. 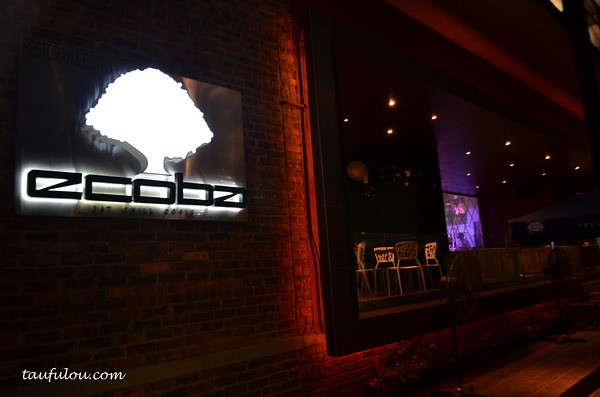 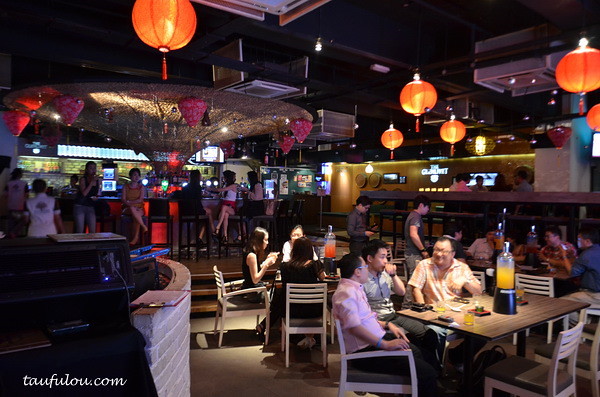 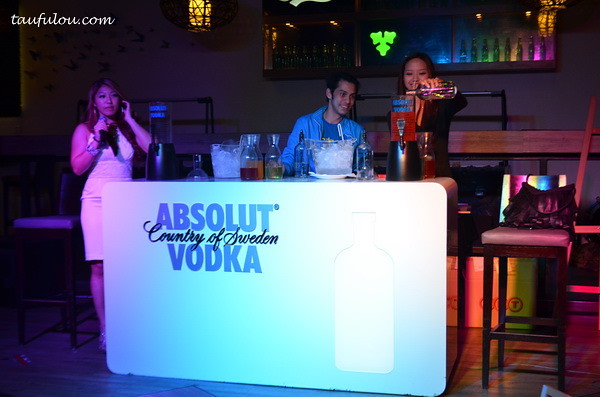 Absolut Vodka the main item for the night. 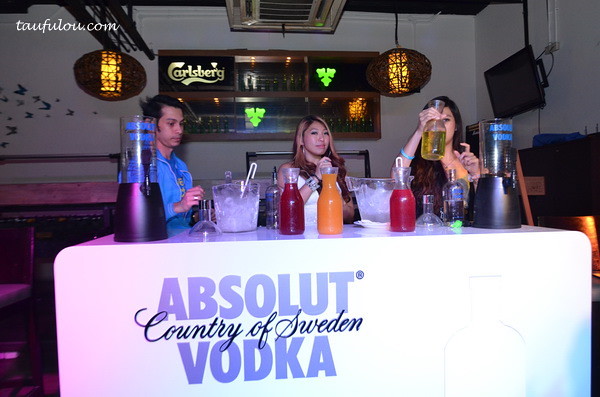 What I mean unique is that we get to do the mixture ourself and its interesting to learn it by how many ml of liquor x with how many amount of mixer to get the perfect combination. 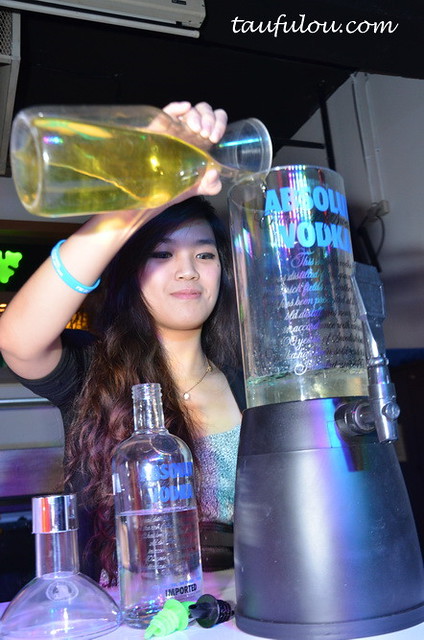 Those who love to do the mixture on the stage will get to bring the tower back to their table for drinks` look how happy Louise are when she heard this. She directly jump up. 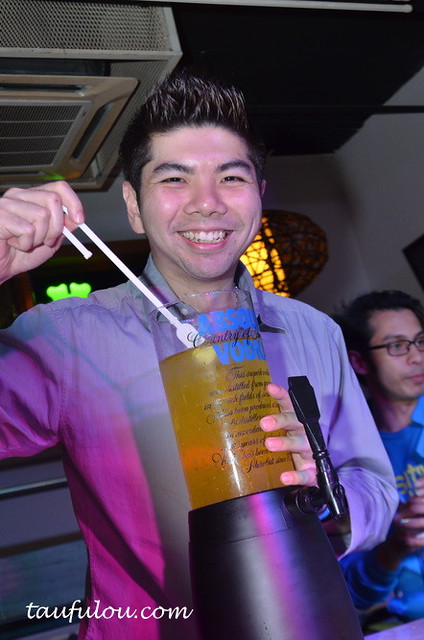 I got my share too . .:D When I saw this tower I was like OMG!! CAN I take this back. Then the girl told me..sorry, you can’t take it back , you can just enjoy it here. I was like…aiii.  .. Love the tower so much as it looks so cool. 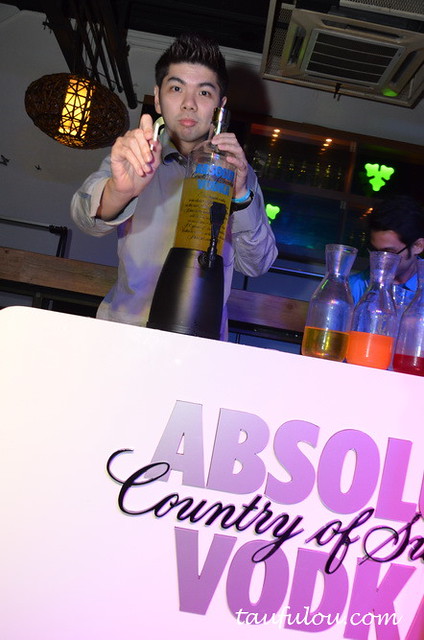 So lets head to my table and lets drink. what we always do is Sharing is Caring. . 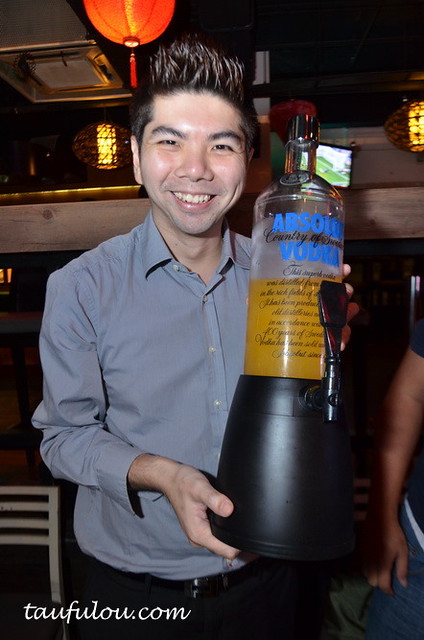 My Vodka mixture is Vodka Orange and Vodka Lemonade. 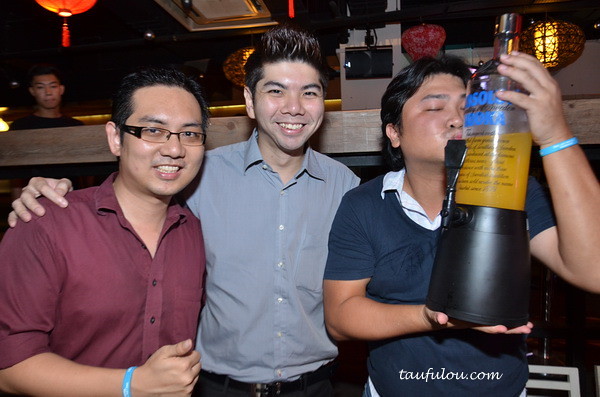 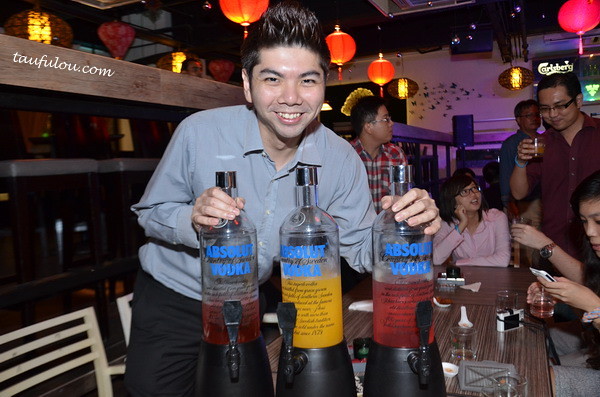 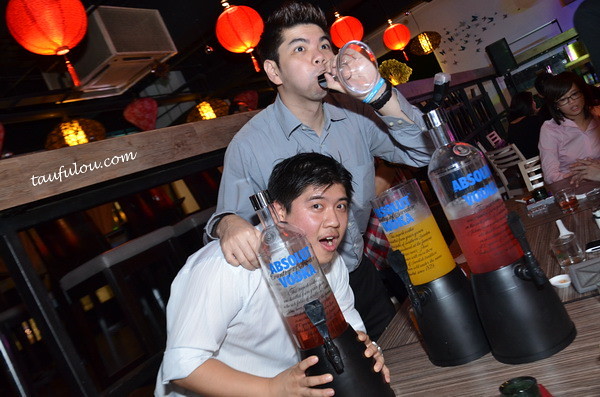 Chris Tock and me. . 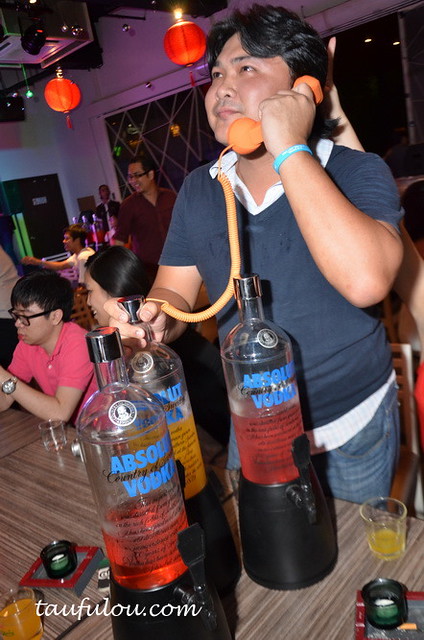 This is what happen when you overdoze alcohol yourself. You trying to plug a phone handle onto the alcohol tower then ‘Hello’? 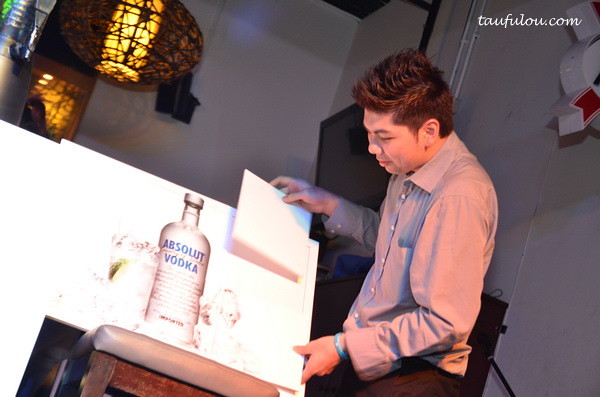 As the night pass, they have a few games and the prize are pretty interesting. So a few of us took chance to went up. Its something quite simple and you get to win pretty good price. . . 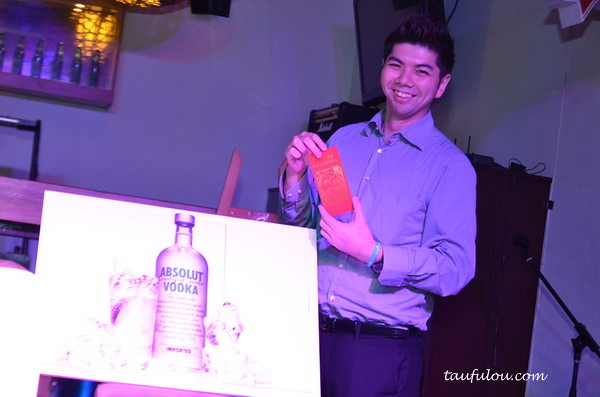 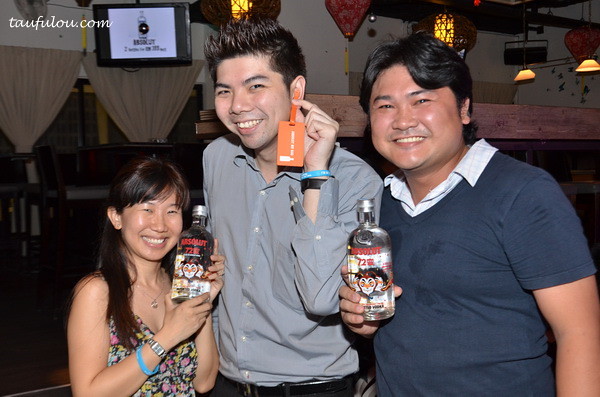 We are all the lucky winners from the stage contest. Evelyn and Mike got the China limited edition Vodka and I got the luggage tag. . Weeee .. ~ 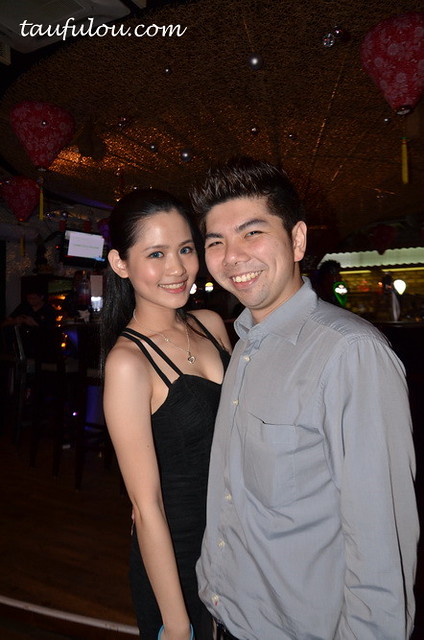 And of course the sexy Samantha is there too . .

It has been a while since I attended an event filled with many of my drinking friends, and its good to see all of them here. Of course when the whole group is there, its a great night out.

NOw..If you do go to this few bar. . The Absolut Tower (limited edition) is now available at :

To get more updates check out and like their FB page here http://www.facebook.com/absolut.my