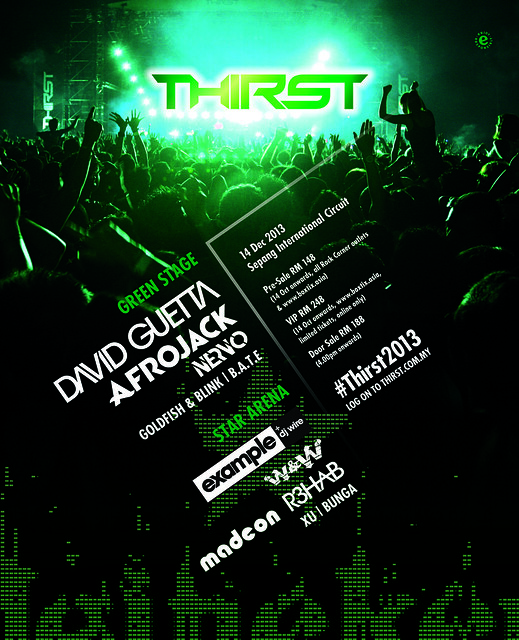 “Heineken Thirst has built a reputation for setting the standard in electronic dance music events in Malaysia,” comments Jessie Chuah, Heineken Marketing Manager. “From the bars and the experiences we create onsite to the artists who perform on our stages, we create the spark that brings this night to life. With some of the biggest established names playing alongside some of the hottest new international talent, we’re as excited as our fans about this year’s festival.”

In just a few short years, Malaysia’s music festivals have gone from novelty to a mainstay of the music landscape. Heineken Thirst has been both a pioneer and a trailblazer in bringing a new standard to music events in Malaysia. In doing so it has created a radical and scene defining mix of international, regional and local music icons at custom built festival sites featuring futuristic bars and next-generation interactivity.

Holland’s Afrojack needs little introduction to Malaysian audiences. If ever anyone met the definition for the phrase ‘festival favourite’, it would have to be the Dutch super-producer. Riding on the crossover kick of this year’s singles, ‘As Your Friend’ (with Chris Brown) and ‘The Spark’, Afrojack is one of the leaders of the Dutch House scene, and he’s the one tasked with building the crowd to fever pitch for David Guetta to take over from at Heineken Thirst’s Green Stage.

It’s been a fantastic year for the French nu-disco pioneer Madeon, making his Malaysian debut at Heineken Thirst. With more than 21 million views of his ‘Pop Culture’ live mix, where he mashes up 39 tracks in three and a half minutes, he’s a genuine new media sensation. A 19- year old tech geek, Madeon has a reputation for thrilling live shows. His love of new technology allows him to constantly break new boundaries as he attempts to redefine the role of the DJ.

In his native UK, dance music producer and singer-songwriter Example is a legend. With four chart-topping albums to his name and over 20 high-charting singles, including the #1s ‘Changed The Way You Kissed Me’ and ‘Stay Awake’, Example is a typically leftfield addition to Heineken Thirst’s Star Arena. One of the pioneers of the UK dance scene, whose sound has brought together the separate worlds of EDM, rave and grime, Example’s live show will bring a touch of UK street style to Heineken Thirst.

Our final announcement for this second wave of Heineken Thirst acts is another newcomer hotly tipped for the top. Holland’s R3hab has been identified as the next step in the evolution of the Dutch House genre pioneered by Heineken Thirst artists like Afrojack and Chuckie. Known for a harder and darker take on the Dutch EDM sound, he’s the go-to remixer for artists like Rihanna, Example, Cher, Tiesto, No Doubt, Calvin Harris and even Enrique Iglesias when it comes to getting a dance floor makeover.

Of course, this comes on top of our first wave of announcements for this incredible night of passion and celebration. Headlining Heineken Thirst’s Star Arena, Holland’s W&W is another Malaysian outdoor favourite. Mixing trance and EDM in equal measures, this dynamic duo are favourites of artists like Armin Van Buuren, Tiesto and Sander Van Doorn, as much for the crowd-pleasing potential of their tracks as for their own inspiring live sets. Adding to the duo theme, Australia’s Nervo add a shot of high fashion glamour to Heineken Thirst. Fashion aside, these former songwriters for hire are one of the hippest acts on the EDM circuit, with shows everywhere from Tomorrowland to MTV’s VMA.

Of course, Heineken Thirst Green Stage main stage headliner David Guetta is a one-man dance music industry whose own music flits effortlessly from the dance floors and catwalks of the world’s chicest clubs to the top of radio and download charts the world over. On the night of Heineken Thirst itself, Guetta will demonstrate why he’s the world’s most sought after DJ and producer seamlessly jumping from mainstream pop accessibility to floor pumping bass-filled tunes.

In his constant quest to bring genres together and push musical boundaries, he’s a reflection of Heineken’s own musical philosophies. He was one of the first producers to bring the big names of R&B and Hip Hop to dance music, working with the likes of Kelly Rowland, Fergie, LMFAO and dozens more to create crossover tracks that helped to propel dance music into America’s mainstream.

This year Heineken Thirst pushes this philosophy further and turns the spotlight away from the stage and shines it on the thousands of people who come together every year to make Thirst such an exhilarating and unique experience. Over the next few weeks we’ll be asking our music fans to participate in a range of activities designed to stamp their imprint and personality on Heineken Thirst this December.

Altogether, this incredible collection of talents from an eclectic stew of dance music genres is what separates Heineken Thirst from other music festivals. It’s a spirit of restless evolution and constant surprises that perfectly sums up the spirit of Heineken Thirst.

To be part of Heineken’s exciting calendar of events, stay tuned at our Facebook page (www.facebook.com/Heineken) or Twitter (www.twitter.com/Heineken_MY).