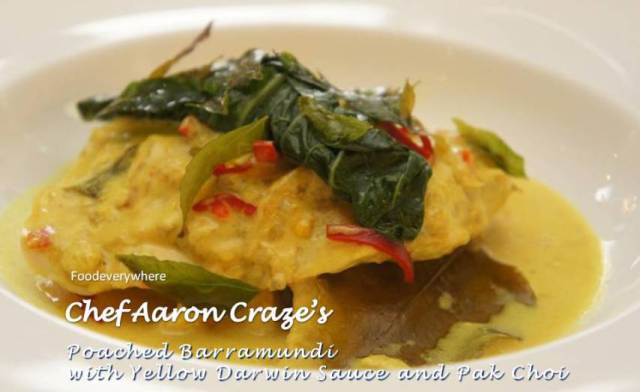 They said crazy twist gives you the explosive experience in your dishes. I say that gives lots of fun, along with style to Chef Aaron Craze as he whips up the taste and flavours brilliantly with the ingenious use of conventional ingredients but bold attempt to create amazing flavours out of the ordinary. 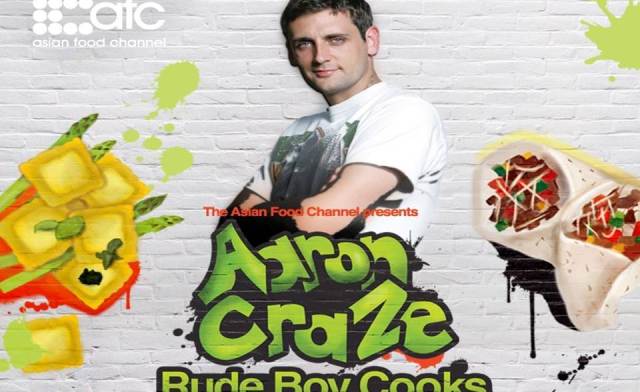 The Asian Food Channel (AFC) and the Berjaya University College of Hospitality jointly features the British culinary talent and AFC celebrity, Aaron Craze, in the ‘Aaron Craze: Rude Boy Cooks’ tour this month and I got this amazing chance to meet this awesomely fun loving chef while engaging with this astounding dining experience, serving a full course meal hosted by man himself. 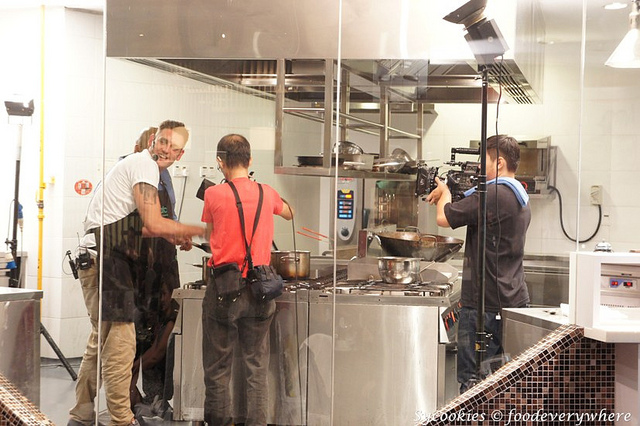 The trouble getting to the BERJAYA University College of Hospitality (official venue sponsor) was a pain on a Thursday night. But the meal was blissfully bedazzling. The students performed at their best when serving the guests and options of several buns were served. The soft buns are not too bad while the butter was of good quality. 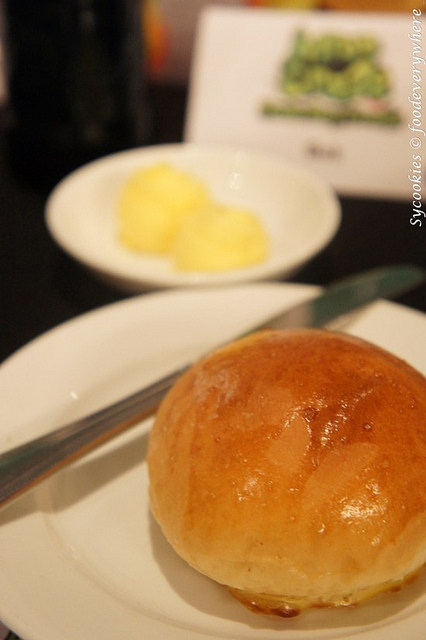 The appetisers were really delicious and it was really thoughtful of them to take into consideration of those who do not consume beef for religious reasons. The first being the Beef Carpaccio with Shaved Pickled Radish and Micro Greens which I really enjoyed very much. There is my favourite arugula and not to mention how the crunch from the shaved pickled radish gave the amazing texture to the dish. When served, it was still chilled so that is real comforting to eat when there is raw meat in it. Kudos to the students, given there were so many guests and all were served simultaneously. 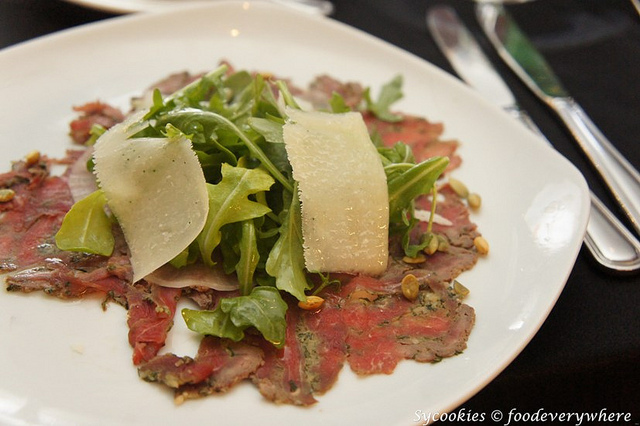 There is a substitution to this for those who do not consume beef for whatever reason and the substitution for this is the pumpkin salad. 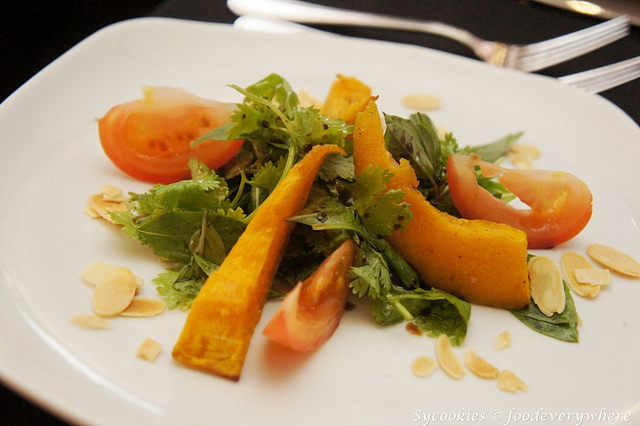 The star of appetisers is for sure this Scallop Crudo with Pomegranate, Crispy Ginger, Shiso Cress and Coconut. The raw scallop is obviously fresh, while the delicate pieces of pomegranate burst into refreshing sweetness when chewing it. Next in line is the tropical flavour of coconut followed by the perk of crispy ginger while the shiso cress beautifully completes the presentation of this dish. 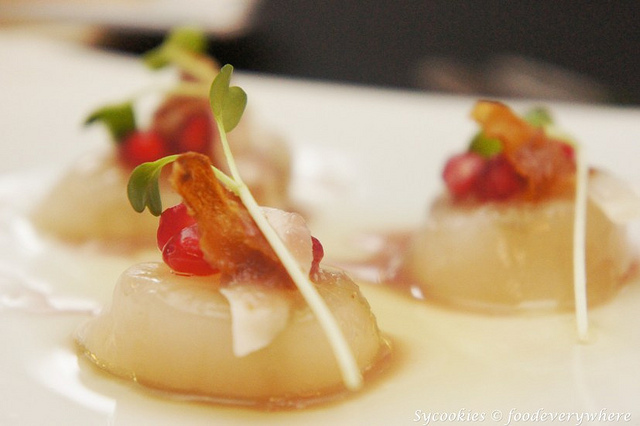 Warming up the palate and appetite next was the Snow Pea and Spearmint Soup which was pleasantly the most delicious snow pea soup I have ever had. The soup was breathtaking with the cooling blast of mint right at the end of the warm legume fragrant. 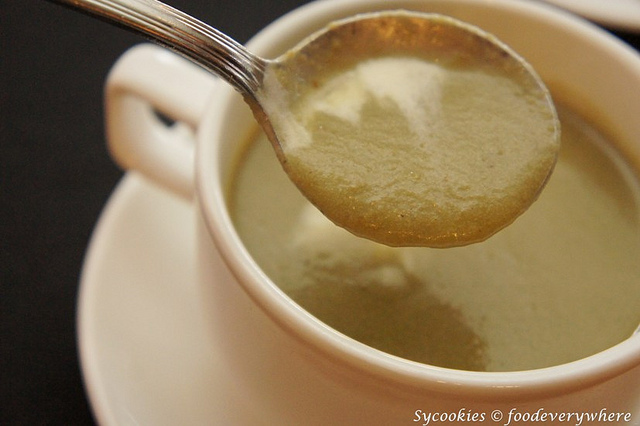 The main is serving at three options while most choose the Poached Barramundi with Yellow Darwin Sauce and Pak Choi which is also the demonstrated dish live on the set over a glass. Full recipe here .

The playful chef really entertained the guests and while letting his mischievous and fun nature sparkle throughout the demonstration, he explained the name of the dish. It is said that he breaks all conventional cooking rules and spills all fervor onto all his dishes while cooking. It is not hard to not notice is bubbly character when he got himself stuck at this tiny opening of the glass panel. 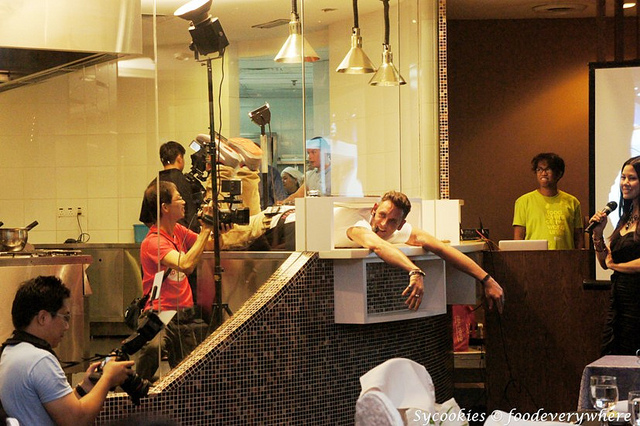 I had my eye on the Aubergine and Mozzarella Bake and am really keen to try this dish, but was served the Poached Barramundi with Yellow Darwin Sauce and Pak Choi instead. Also on the main course option was the Wasabi Crusted Lamb with Braised Chinese Leeks which might not be a preference to the majority as not many can accept the distinguish flavour of lamb hence most just settled with the fish instead. The sauce resembles the local butter milk dishes, only this one is a more diluted form. Which means, by comparison the flavour falls short to satisfy those so used to the common rich butter milk flavour. 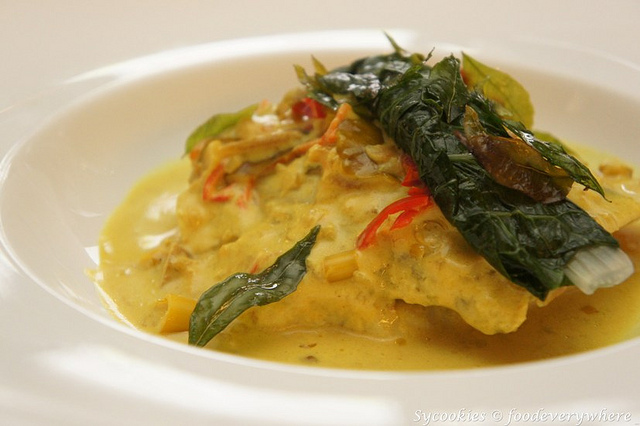 Dessert is interestingly fusion touch of a combined culinary. The Thai Basil Panna Cotta with Scottish Shortbread Biscuit and Poached Rhubarb illustrates an Italian dessert with Thai Basil while the poached rhubarb decorates it beautifully. 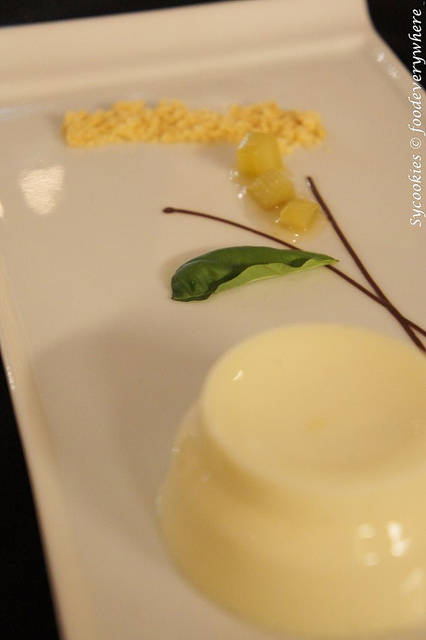 The Scottish Shortbread Biscuit on this dessert was the least impressive I am guessing probably due to over exposed on the plate for too long. 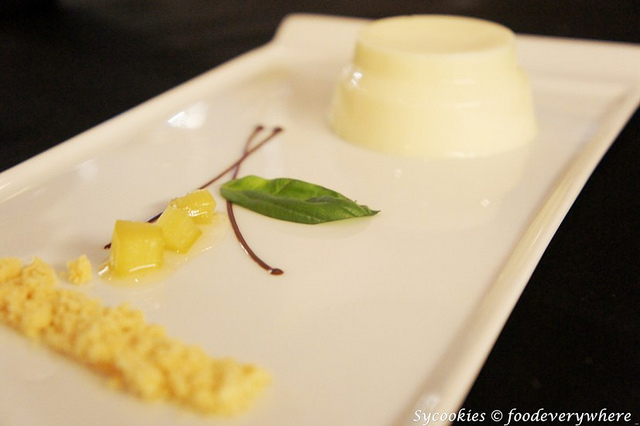 Chef Aaron Craze exhibits strong determination, immense perseverance, passion, and meticulous when it comes to culinary. Coming from a disadvantage background, he transformed to a celebrity chef when he prevails as the winner in Jamie’s Chef, a television competition created by Jamie Oliver back in 2007 with outstanding performance. With strong devotion and determination, he has pushed himself through many challenging moments in his journey to becoming a successful chef and definitely serves as an inspiration to not just budding chefs alone, but many others as well. 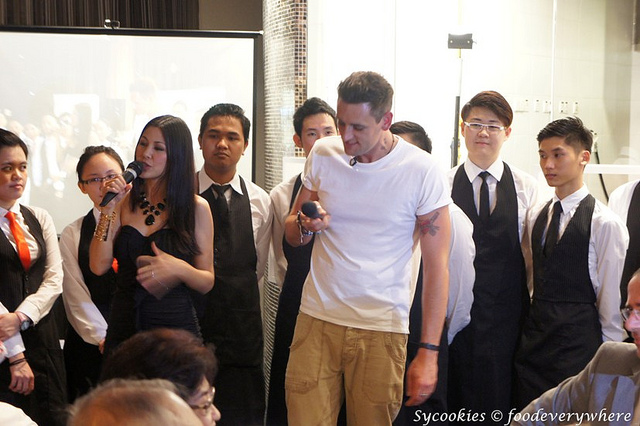 The night ended with greeting his guests from table to table and a toast of loud “YUM…SENG..!” at our table. The man himself is such a good sport. He also find the premium beer Kronenbourg 1164 somewhat refreshing. And since I am no fan of beer, I can only thank them for being one of the sponsors and for the invitation. 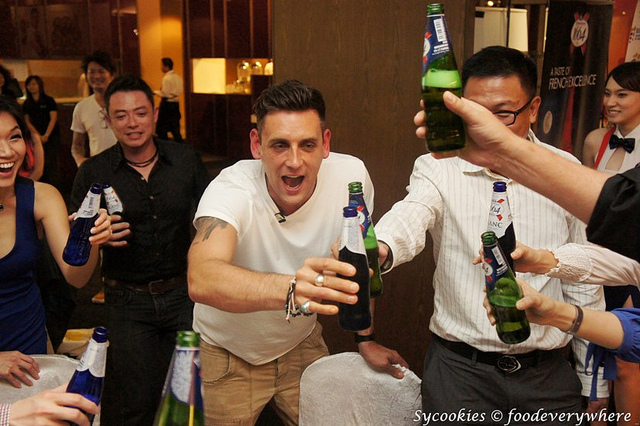 The Asian Food Channel will be showing Rude Boy Food every Thursday at 11pm on Astro Channel 703 for 13 weeks (till 27th June). Catch Aaron Craze and his crazy weave in culinary in this exciting new series and you are sure to be enthralled by those delicious foods as well as to be entertained by his charming skills. 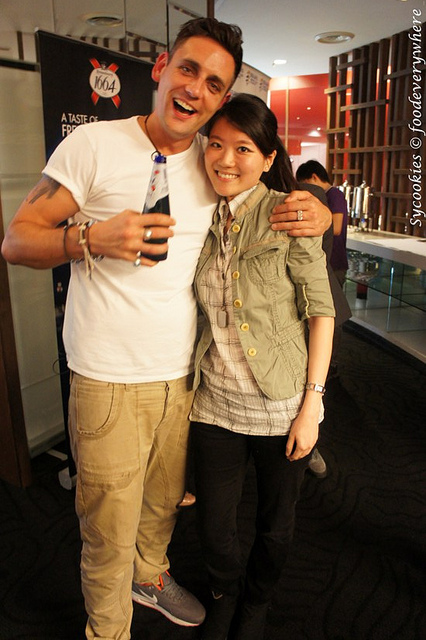 Thank the good food and the effort of all the cooks and staffs for serving us. And most importantly, thank Soo Yin from Foodeverywhere for the great write up.