I still remember when I was a kid, I used to follow my mom to wet market in the morning, and after that will head for breakfast with lots of hawker stall to choose from, not until that I have been reading about Imbi market about variety of food there with one of famous stall that stands out among the rest is this very traditional, Hainan stall which serve half boil egg, roti khawin, Signature KOPI that make the whole market so merry. Ah Weng Koh Hainan Tea

It was not until last Sunday, woke up early and my friend drag me to this market after she knows I have been talking about it for quite some time. First time being here and we reach there around 11am and most of the food stalls are like ready to pack up, as they usually operate till 12pm. 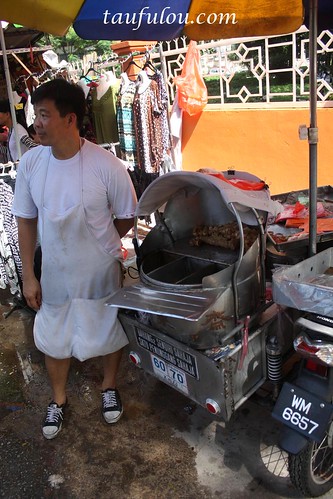 After walking in, the first stall surely caught my attention, as I do not know what food it is and a few uncle are buying it, seeing it with a few ingredient to mix and match. 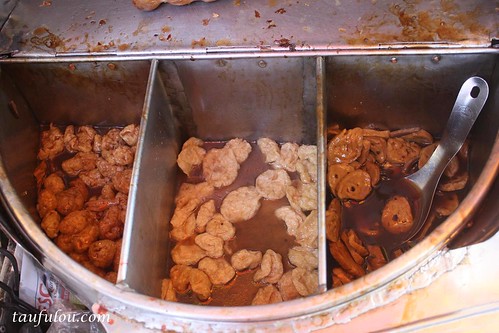 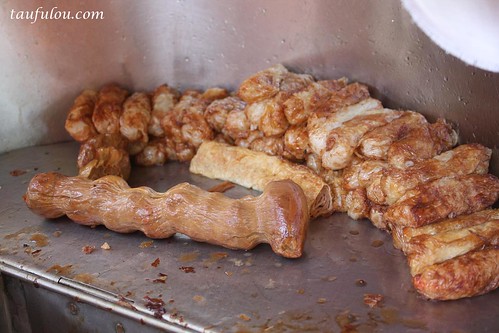 and specially bean curd roll till a stick. The uncle sell it a mix and match for small RM3 then if you want bigger portion its RM4 and RM5. He do sell it seperately. 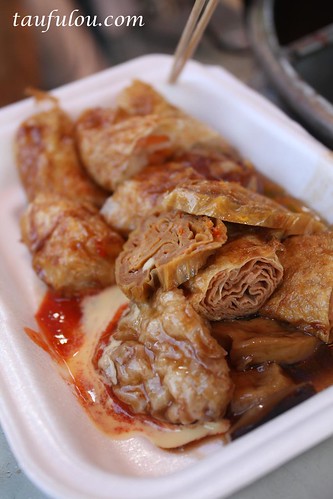 My mix and match which is everything is available, then add in chili sauce and the best is mustard sauce!

I just love the taste of it with the bean curd is soft and juicy after soaking in the soup base to get the aroma, the pork taste so soft and chewy dipping with mustard and chili taste good as I find the taste is unique but I am loving it. Recommended if you are adventurous. 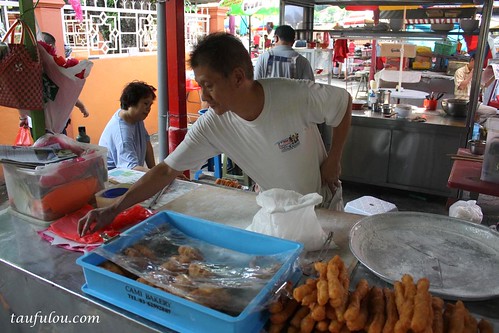 Then I walk to the other end, saw this auntie sitting there and frying ‘Yau Char Kway’ or ‘You Tiao’ that looks so tempting that just fried hot from the wok.  Then the auntie so funny, as she saw me holding a camera and ask her husband faster act a ‘posey la’ (make a pose) and the uncle so shy and said don wan la, yet the auntie asking him a few times. 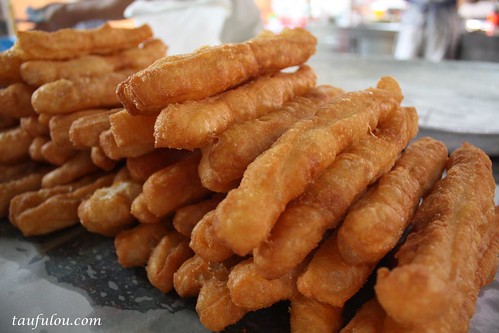 Deep fried ‘You Tiao’ that just came out from the wok, with outer layer so crispy and soft in the inside, if I were given a glass of warm soya bean would be just perfect. RM0.70 each. 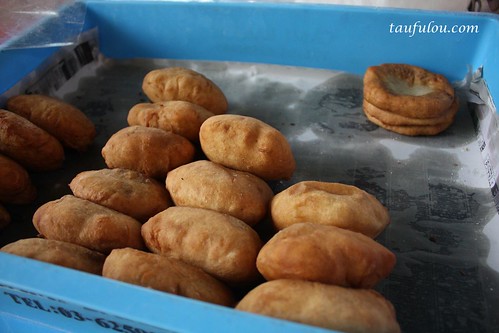 Besides that, most of the stalls that sell Yau Char Kway do sell ‘Ham Chee Peng’ which is another type of Chinese kuih that insert with sweet, salty, red bean paste in it.

hahah..cuz computer rosak..so have to post all my makan outing recently 1~

Ah Bok, Im day everyday except Sunday & Monday since….???? cant remember now…so, so, so, many years!

Have a standing order at Ah Weng Ko Hainan Coffee everyday at breakfast! Hope to catch you once day ya!

I’m only eying at the delicious you tiao!
.-= iamthewitch´s last blog ..Dry and Wet Bak Kut Teh at Yap Chuan =-.

hahahha~
got that tempting mou? i also eat alot~

hahahah one of my favourite breakfast place at imbi market, didn’t know they have vegeterian too!
.-= sidney kan´s last blog ..KAISEKI at Xentri D’Garden Terrace =-.

tthat’s what they are famous for loh

Hmm … this one remains as one of my personal spot for breakfast in KL, only hindered by the fact that the place’s packed on weekends.

Went once on a Monday morning and so glad there were so many spaces for parking. Only to realize that the market’s closed.

They have a rather volatile temperament, hence one only needs to order how many cups or glasses (and they’ll give the cham, if i’m not mistaken), and the breads. The Apollo bun’s better IMO, the toast somewhat normal.
.-= J2Kfm´s last blog ..A Hidden Gem Named Pu Yuan =-.

oh, they close on monday? thanks for the info eh…

Sunday pretty alrite la cuz got a open space carpark to park at but have to pay RM2 la..

never tried the apolo bun yet., next round next round~

been there a couple of times, and gosh! always so hard to score a table!

hahaha…. i always went there when i was a kid! really miss the place especially the pork intestine noodle! thanks for this post. i am going there, perhaps, next week!!!
.-= Autumn´s last blog ..*~ Beloved Telur Bistik ~* =-.

[…] street food had move into this ICC Pudu building.  . [I still like the old classic pasar feel(click here)]. Of course in here is cleaner and […]