Well, woke up early next day as Goft was already at lobby waiting for all of us, which she mention to us that we are heading to one of a famous restaurant chain from New York for breakfast which is just directly across our hotel which is Dean & Deluca. To head here is pretty easy, just climb up to the SKY Train Station and just walk across which sandwich in between the 2 exits of the stairs.

One of the reason that Goft bring us here is because its famous restaurant chain from New York that have 16 outlets around in US and another 16 outlets out from US and here is one of the outlet that opens its door to public since mid of last year and according to her, its a must try outlet for us. Well, she also did told us that alot people hype about it, and leave the tasting to us to judge. 🙂 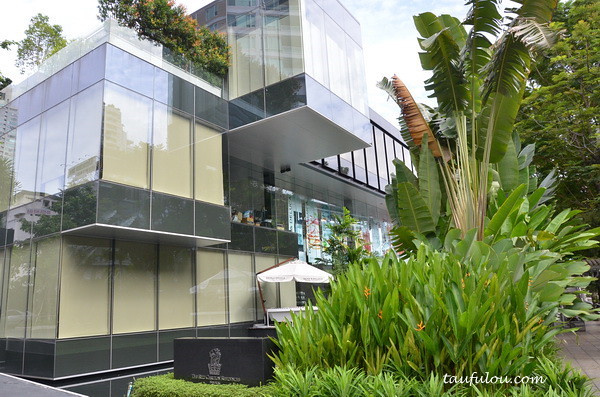 Dean & Deluca is well situated in the heart of Silom under the Mahanakton Project whereby will be completed around 2014 that will marks tallest building in Bangkok. It will also share along with Ritz Carlton Residence, Bangkok in it. This area is known as one of a busy business district in Bangkok, so put this place nicely sandwich in between the exit of Chong Nonsi BTS SKY train service. 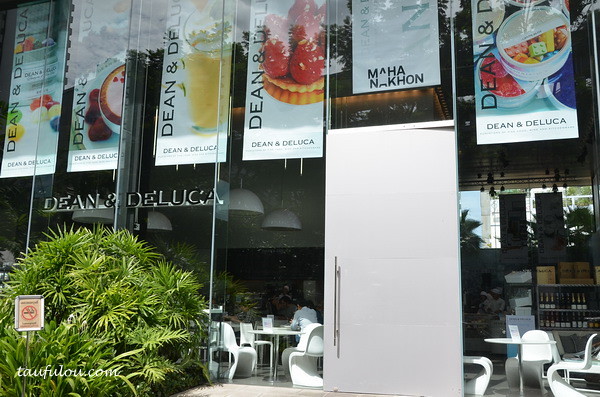 So here we are early morning for our breakfast and it was only 9am which today is the day of their Queens Birthday. So you can do planking right in the middle of the road where no car will hit you. 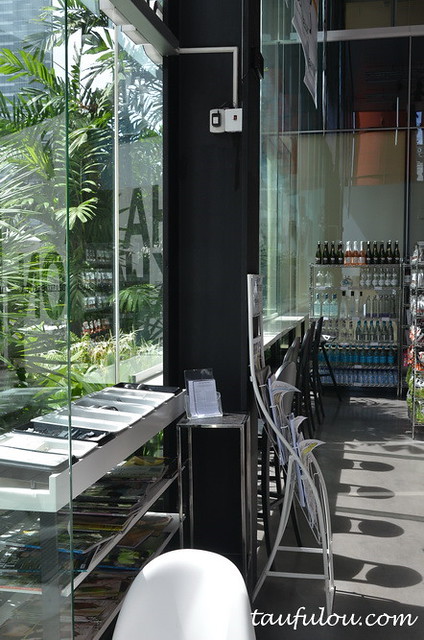 Once we open its door and set foot into this outlet, we know that our breakfast gonna cost us a bomb and it was already packed with people. 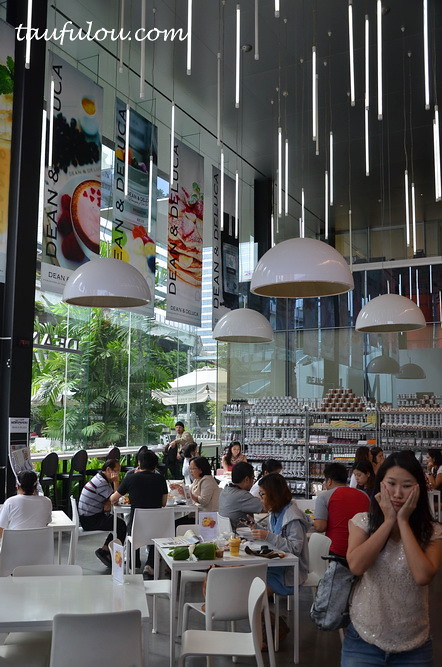 With interior of high ceiling, concept following back the ambiance of busy cafe in Manhattan, a huge space filled with simple white chairs and tables, share along with minor part of departmental rack right at the corner for you to buy some of their snacks. This place looks like a typical western cafe that smack in high end area to attract those bosses or business people over for lunch or coffee. 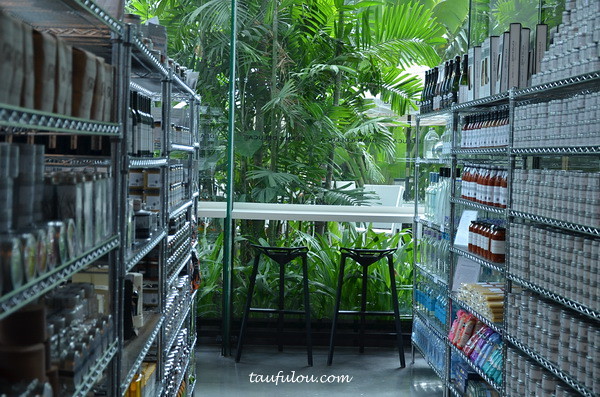 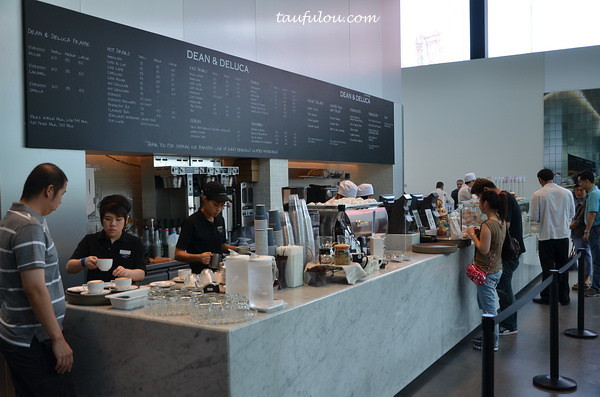 A huge board behind the order counter that design with huge slabs of marble and you place your order right at the moment. 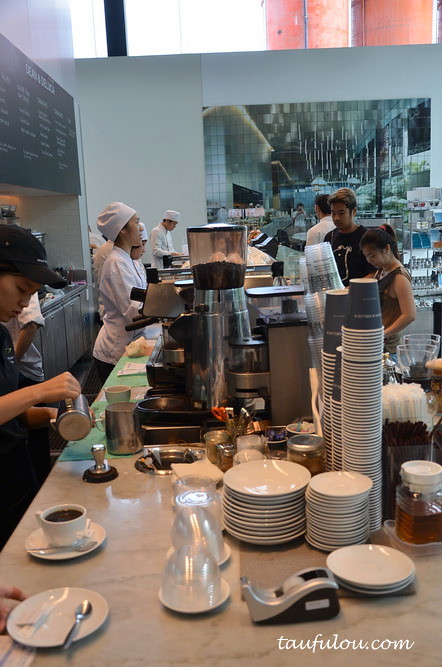 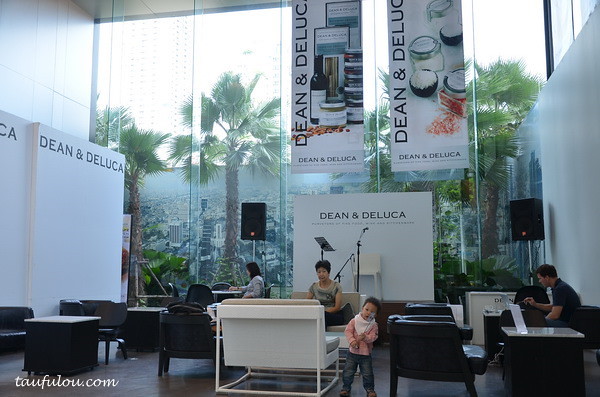 Was told that during weekend, they have pretty nice live jazz band that attract many people over to have their wine here and enjoy the music. 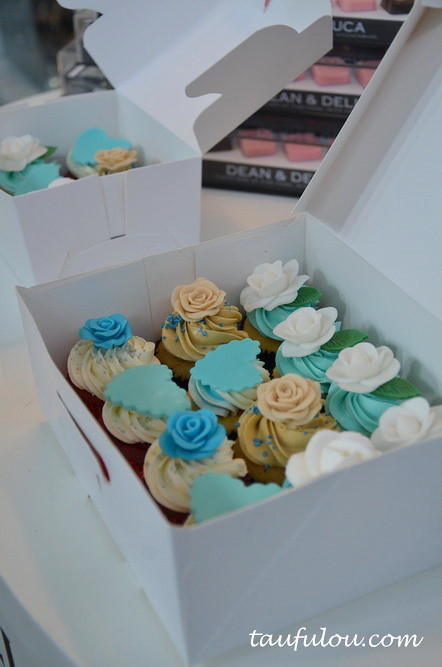 Then we head to the order counter which we are already drool with saliva after seeing most of the display rack. 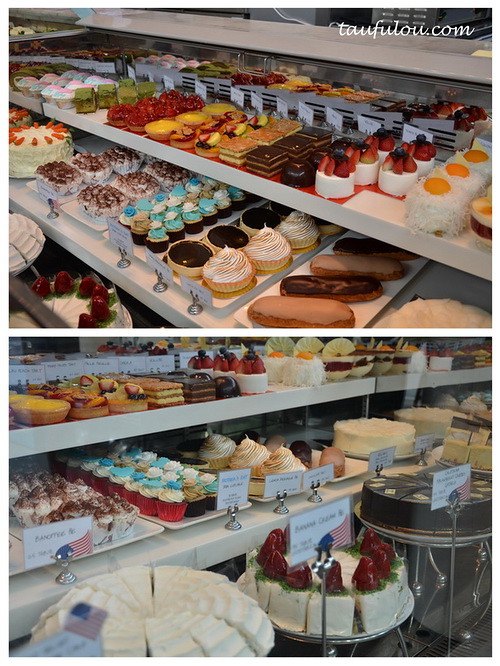 of course the desert area kill us off but in such early morning, most of us do not have the appetite to eat one of this yet, if we are here during tea time, we will be crazy over it. 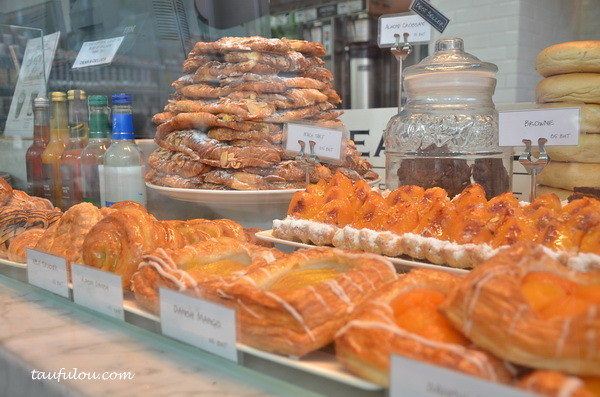 We were pampered with huge selection of bread and pastries, that get to choose on the spot. Then the girls went crazy, keep pointing, I want this, I want that, please order ahh.. Remember..plz plz. . . 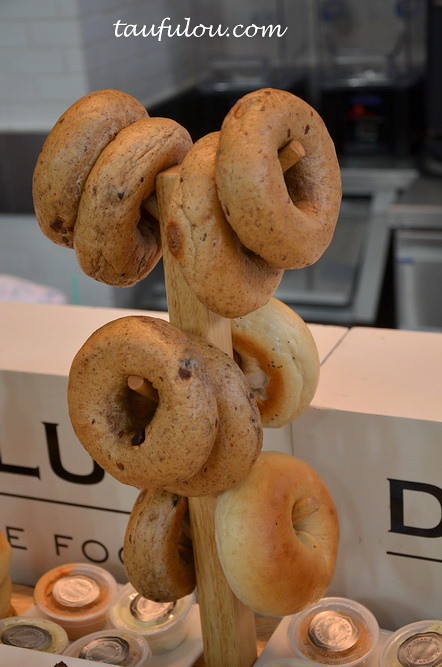 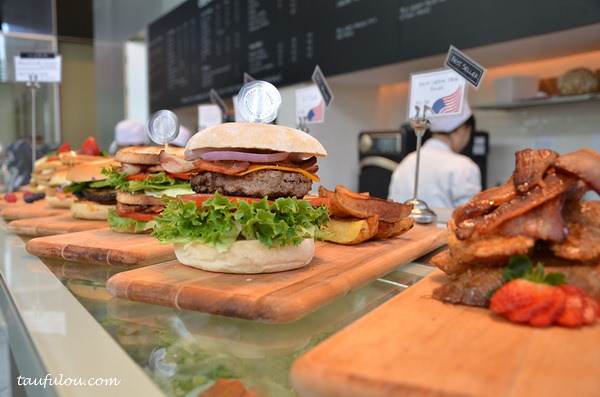 If those bread and deli do not attract your attention, then I believe the sample of main selection display right above on the rack will tempt you on. 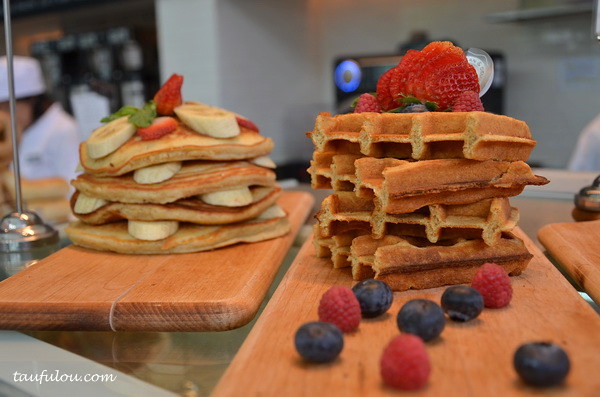 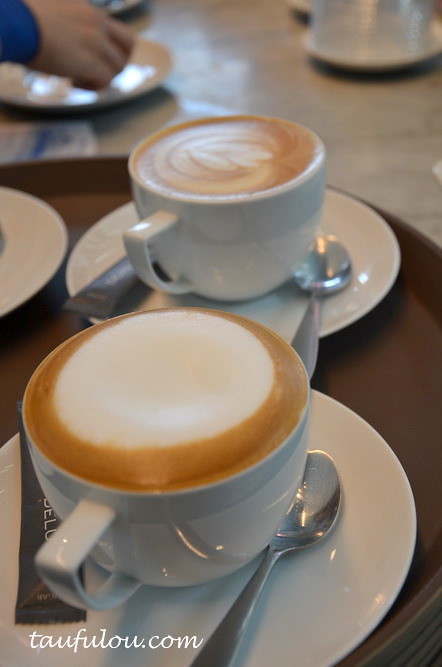 At such a nice cafe deli area, it would be wrong if not to order coffee for breakfast and I would say the coffee is well prepared that you would rarely see such a nice smooth froth on the top. 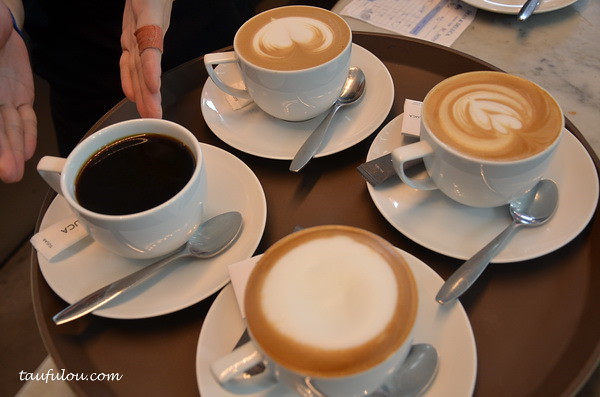 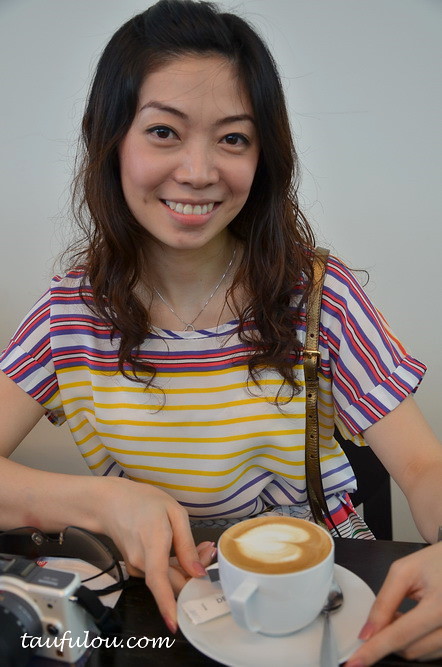 Annie and her Latte @ 150 Bhat , as I would say the coffee taste is quite a let down for us, that the taste is a bit pale end with a bit bitter after taste. Although, did try out a few selections of coffee before, certainly this are not my preferred choice. 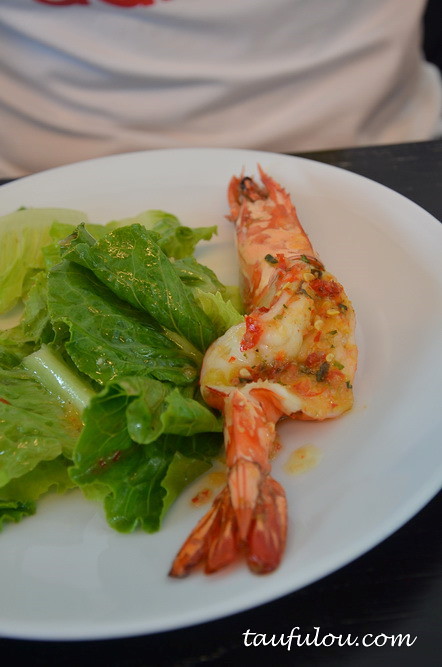 Early morning, Tatt already order such a meal that makes his taste bud awake by ordering Lime Prawns @ 275 bhat, 2 prawns that served along with greens and shower with some of its gravy, not a bad choice, for sour and bit of spicy taste in the morning. Prawns are fresh too. 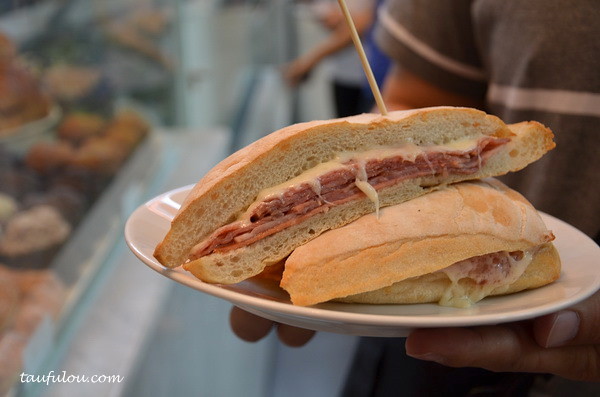 My choice, I start off with plain Meat Panini @ 220 bhat. I find that its too heavy for me, as the serving is huge, good enough to share for 2-3 pax and its quite salty because many layers of hams and cheeze melted on it. The bread is quite dry as I believe its meant to be in this way, and I think its best to order something else. 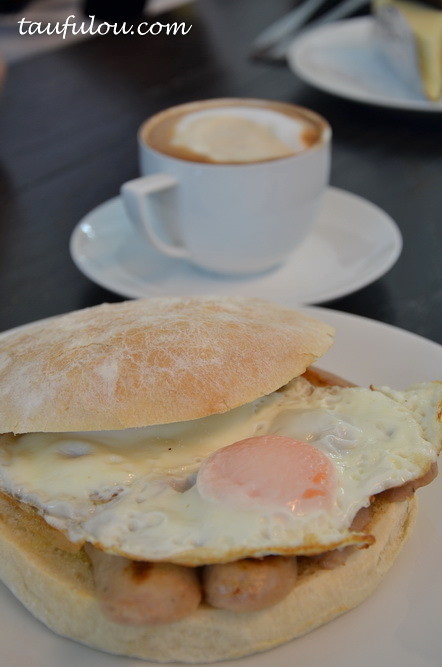 Next the girls order Double Egg and Sausage Sandwich each for  275 Bhat. 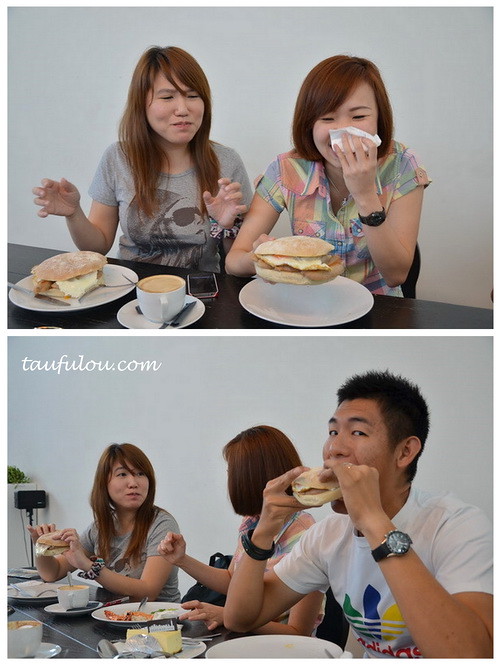 They ordered 2 portion and they are shocked when see the servings of it which is pretty huge. Collen and Nancy were having fun time on playing with the bread as they keep saying, how to go into my mouth, so wide and huge, then Tatt give it a try. . . 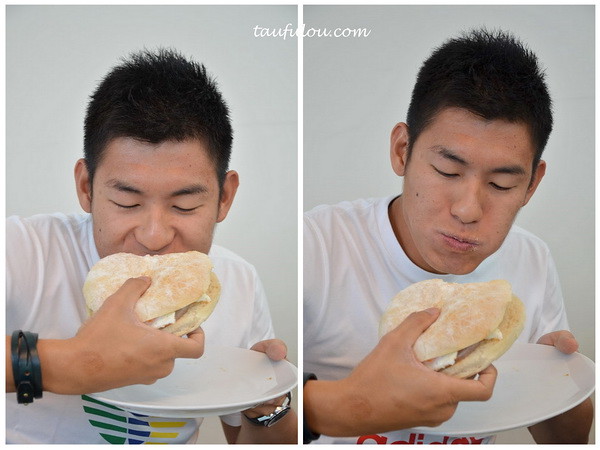 Even him also having hard time in biting and chewing as the bread is pretty dry that just smack 2 eggs and sausage along. 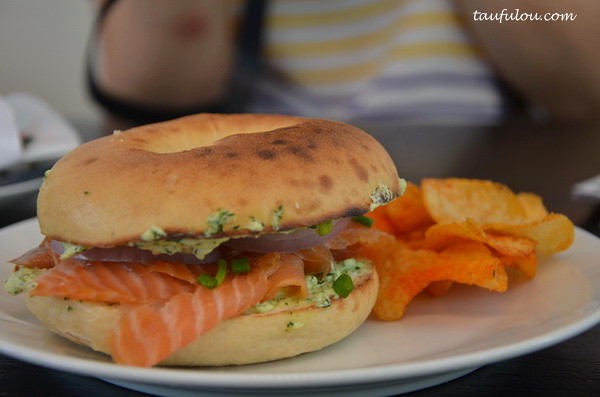 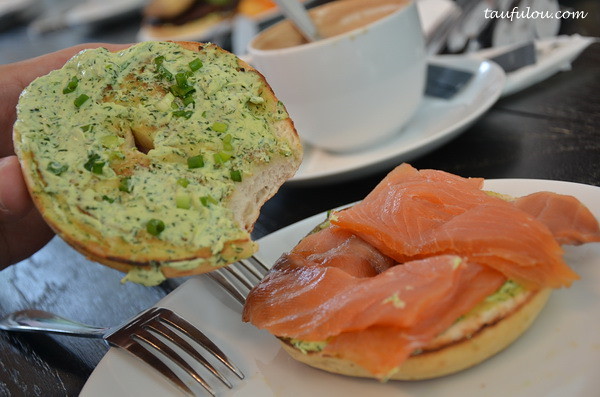 This was the hit among all of us, with generous slices of salmon given along with bagel and the sour cream is nice, not too sour and creamy which is just perfect, well toast and prepared. 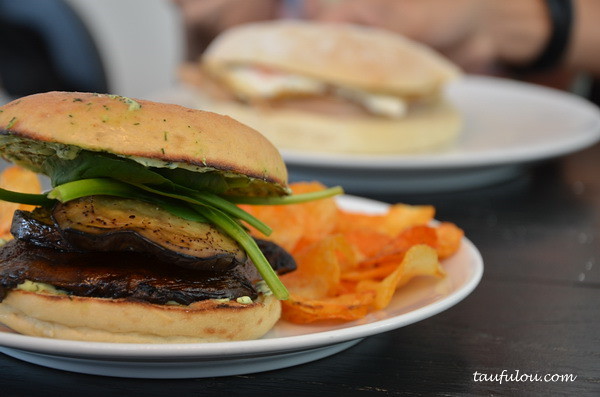 This Bagel & Scott SMK @ 250Bhat, I do not really know how to enjoy this, I gave it a bite and pass but Steven enjoy every bite of this. 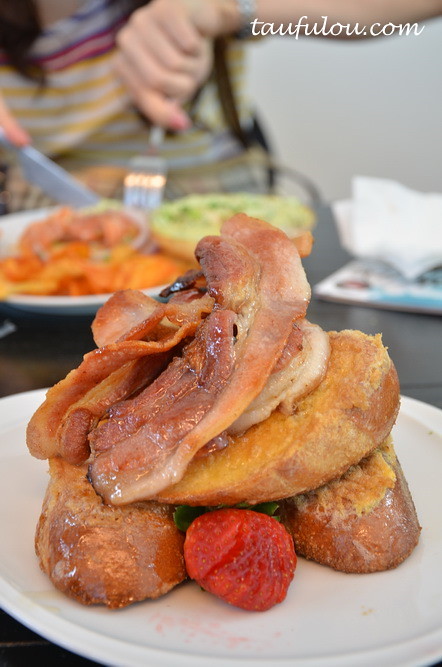 The super star among all dish that ordered. French Toast with Bacon @ 250bhat, was gone in seconds when it was place on the table. Well toast and fried along that coated with layer of egg and a layer of honey tat make it a bit sweet salty, crispy on side then eat along with bacon is just perfect! – Recommended~ 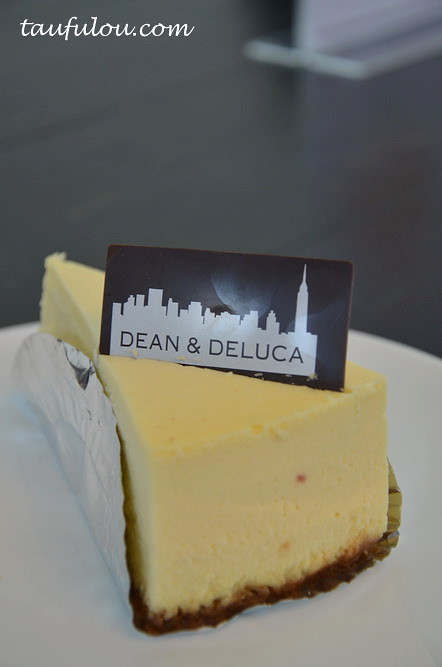 New York Cheese Cake was served at the end with Tatt order it mysteriously at 145 Bhat. We left it quite a while to eat our mains first then it start to melt that the texture is a bit off, it was very rich in cheeze that we love it, with the crust is crispy just as the cheeze cake as we expected it, best to eat it while it had been served or out from the fridge. 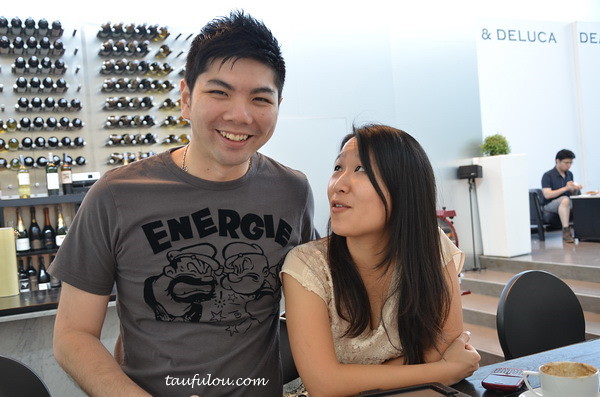 Well, the whole experience of New York choice of breakfast is the typical type of western breakfast I would say, with panini, and dry bread that can be expected, well ..  if there is a hype on it, I guess maybe you guys can give it a try on their mains that looks pretty good on the display rack, do expect that it will cost a bomb as this is one of the most expensive breakfast we had that cost us 2950 bhat for 6 pax.

It is one of a recommended place from me if you want to try classic western breakfast for the first time but be willing to be pay for the price of it, and the ambiance. On my second thought, I think you can spend the money else where for better breakfast at that kind of price.