Home Bar & Bistro Casual Nights at The Library @ The Curve

Casual Nights at The Library @ The Curve 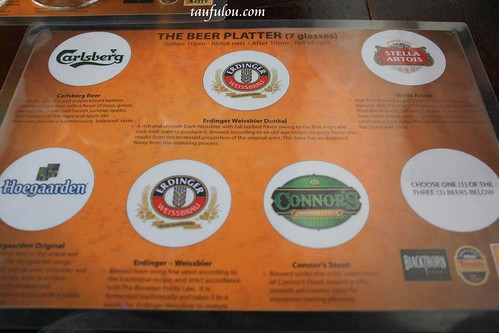 Not until I visited this place again on early May that me and my friends kena Con by them, that the promotion of buy 1 free 1 is still going on now, in addition to that, they have come out with a new promotion which is The Beer Platter, consists of 7 half pint of different beer for only RM 68 nett (before 10pm) and after 10pm it is RM88 nett, daily offer, which comes to the calculation that it is much cheaper than Coffee Bean or Starbucks. (that’s what I think) 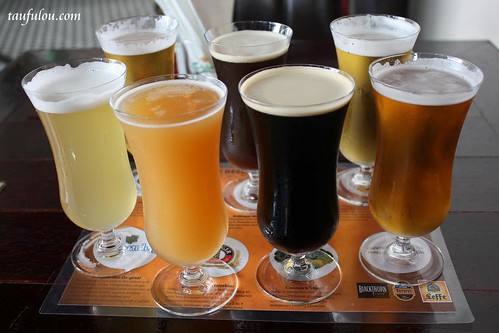 Of course during Sunday afternoon I would not finish everything, just a casual day to chill with my friends and we shared but ended up ordering another 2 sets of Hoegaarden.

What I have heard from my friend that The Library is going to open at The Gardens very soon, which is I am looking forward for it that I need not travel so far to The Curve, and just realise that no wonder this is one of the hit place to be during weekend as the play nice music and great live band.

hehe, yeah loh…
next round we go drink together..;p

wah i would love to try the 7 different beers. They are so stupid to price the cakes at such an expensive price. Who eat cakes with beer?
.-= eiling´s last blog ..Ying Ker Lou Hakka Cuisine @ Sunway Pyramid =-.

you should lei, since you love alcohol also..:D
no idea lei..maybe they trying hard for it?

i’ve never been inside but passed it at the curve.. initally thought it was abit or an irony to call a pub a library.. until i heard it was coz of the waiters/waitresses dressing up as librarians… no pics of them? haha.. curious to see the outfit
.-= lechua´s last blog ..Putrajaya Hot Air Balloon =-.

didnt take their pic..maybe next round i go take then update..so you can see.:d

Wah nice beer platter! I’m sure you can finish all of them on your own lar.. 😛
.-= iamthewitch´s last blog ..Finally, Klang Bak Kut Teh at Fong Keow =-.

haha..so they have library and laundry too there 😛
.-= ohmywtf´s last blog ..My Big Fish Moment with Pizza Hut and Little Mermaid!! =-.