Last year it had been a crazy year as got bombarded by lots of ‘red bomb’(red invitation card for Chinese means wedding dinner) for some of my friend had decided to settle down with their loves one, I particularly got like every week 1 card since beginning of December till end of January. If just by attending all, I would just need to fill in a form and declare broke. Usually the food in the wedding dinner would not be so good and it always depends on which hotel or caterer and its a good news for couples planing to host wedding this year, certainly this would be a option. 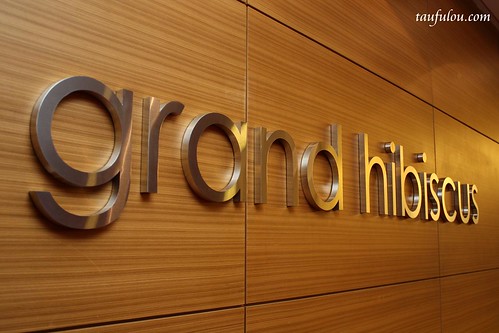 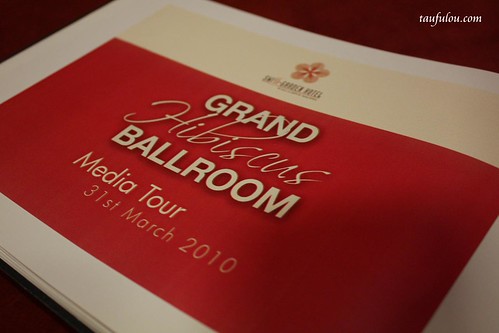 It was not until few days ago, got an opportunity to take a glimpse at Grand Hibiscus Ballroom media tour that organize by Swiss Garden Hotel and also a chance to taste on their wedding package menu. 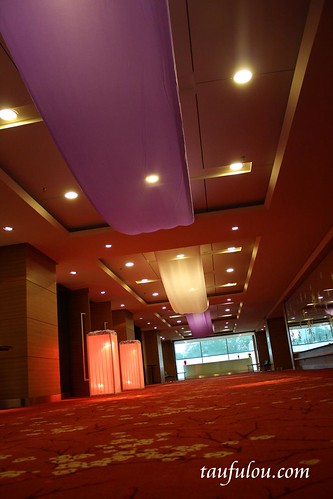 The ballroom is brand new that was just opened recently, and manages to host around 5 wedding dinner in such a modern design ballroom. 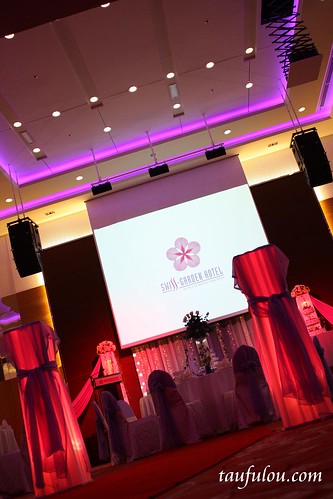 Every couple will demand for the design of their wedding hall, and to make the choice easy, Swiss Garden had a proffesional in house wedding planner to assist the couple to cater for their demand yet they also do have certain package and theme to go along for the night. 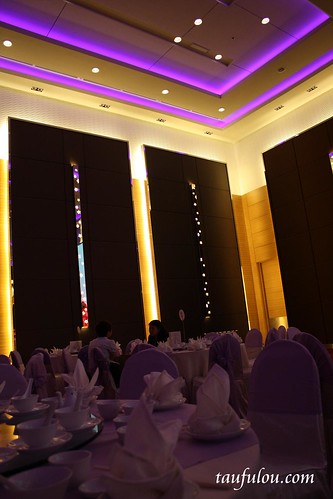 The wedding dinner that was just hosted the night before that the newly wed’s chose the theme of Lavender, which signifies calm and peacefull. Besides this, there are a few other theme such as, Rose, IRIS, Jasmine and a few more. 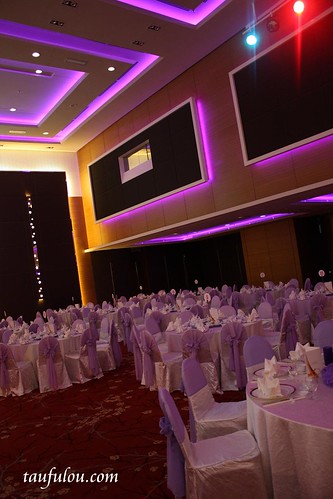 The whole ballroom and lighting will be decorated among the theme as the main colour for Lavender is light purple. I just love their modern design with a touch of nature with some of the wall lighting are flower’s design, so do the carpet. The ceiling colour will be set according to the theme too. 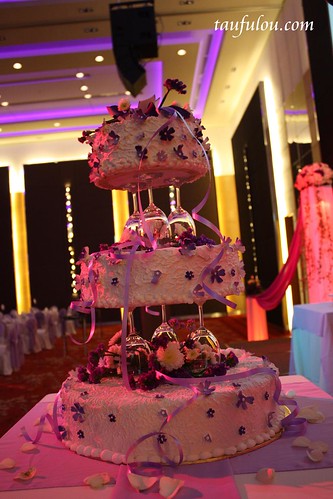 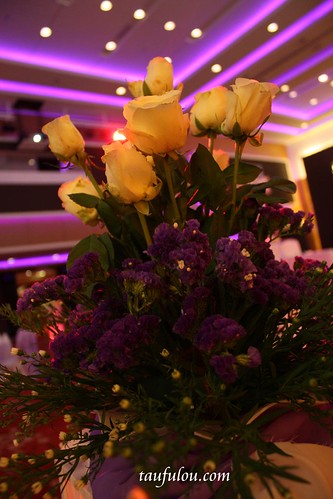 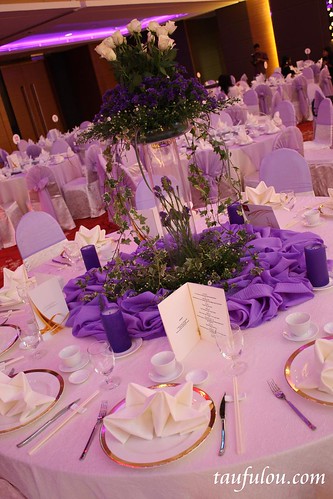 The table cloth and settings are set accordingly to the theme. 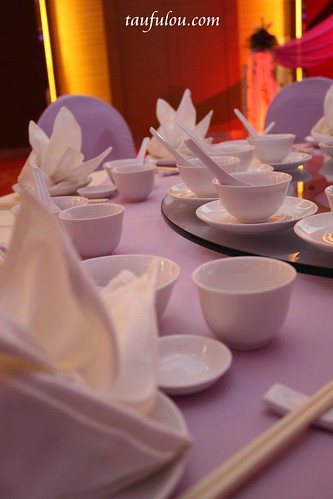 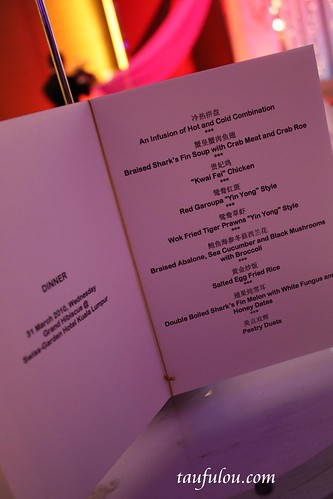 This is media review for the dishes of the night that the package ranges from RM750++ – RM1450++ per table. 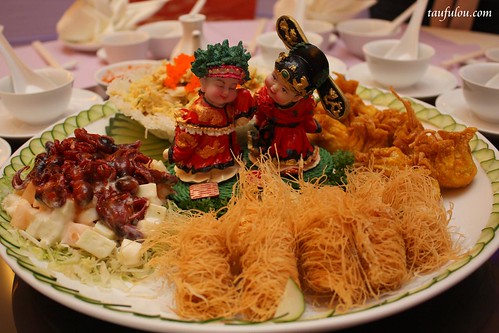 ‘An Infusion of Hot and Cold Combination’ was the first dish of the night. 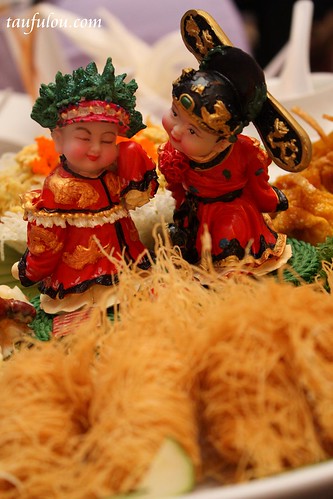 It was fried very crispy on the outside till you feel like you are eating crackers and inside is filled with shirmp. 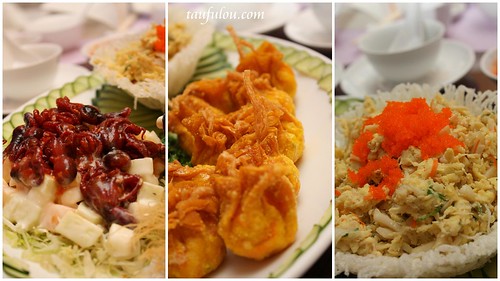 ‘The japanese Octopus which is fresh and juicy, Fried Wan Tan and Fried Egg with Shark Fin and Egg Roe’ 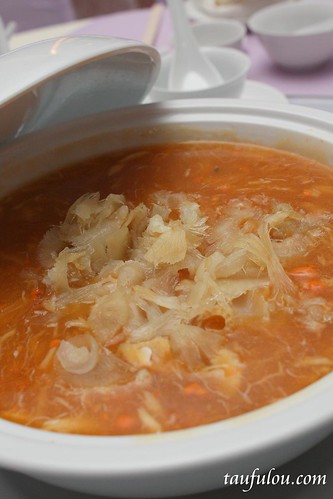 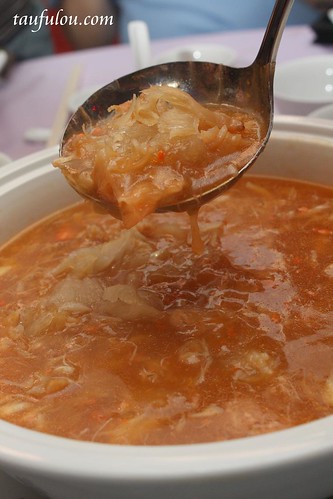 As I would rate one of the best, love the starchy salty taste and with vinegar in dark maroon colour add on it, just pull out the taste of the pot cook aroma. The sharkin added in was genuine and top grade, that every sip we can taste the slices and the crab roe added in can just feel the rocky solid and a bit salty. Makes me remember the first bowl of shark fin when I try when I was young. 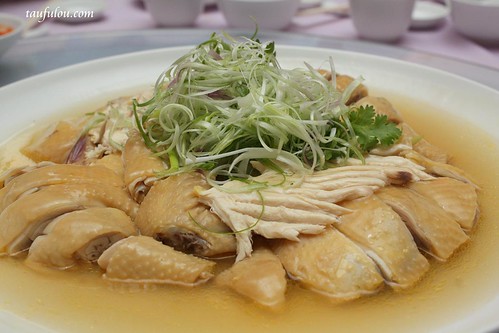 ‘Kwai Fei Chicken’ something that look and taste very simple but had been cook to the best, the soup base taste is very mild, with Chinese wine, a bit of Chinese herbs, a bit salty taste in it and the chicken meat had been steam and cook to its juiciest and soft meat. 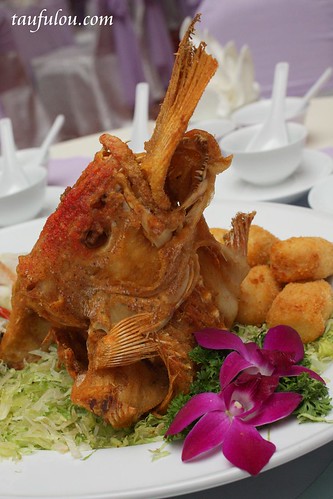 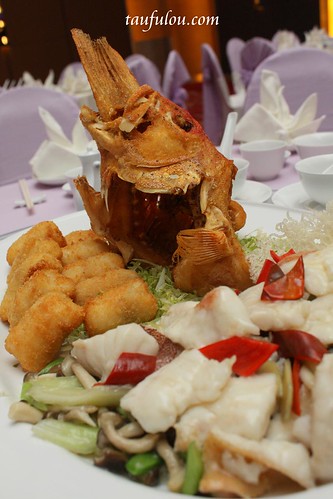 This fish is one of the best dish with its meat so juicy and tender as the chef mention had used 8 hours of marination. Imagine it the succulent taste. 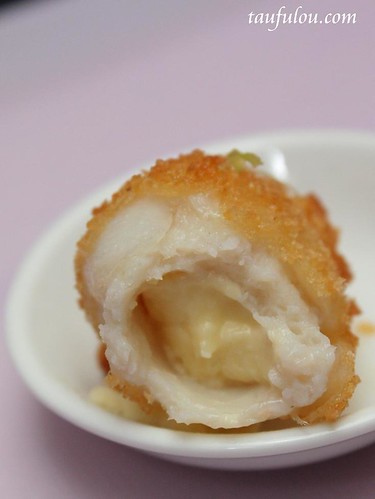 If you are a cheese lover, the meat had been dough and marinates well to stuff the cheese in it and fried under hot oil till it was golden brown and the cheese just melt. This is what we call Chinese version of Stuff crust pizza. It taste awesome and we had not enough of it. 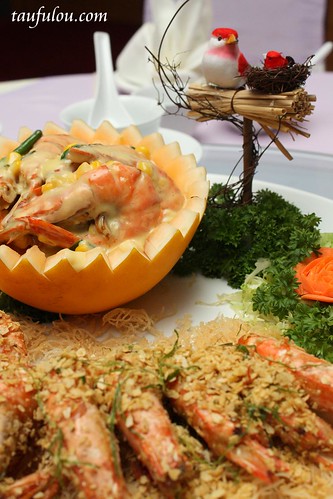 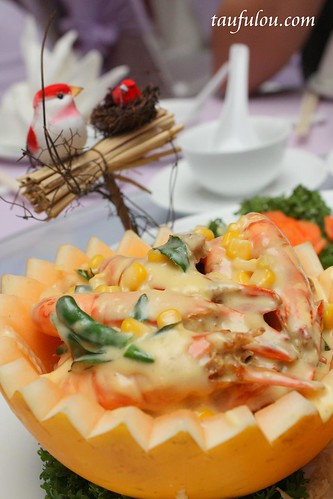 Salad mayonnaise prawn is rich in taste, not that creamy which suits the taste of old people with high cholesterol that the meat is chewy and fresh. 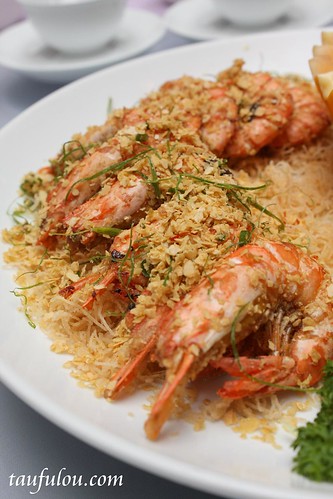 My preferred choice, as when I we took picture of this, the smell of the fried Nestum had just makes me put want to eat it instantly. It was fried till the aroma came out and its crispy to eat along with the prawn. 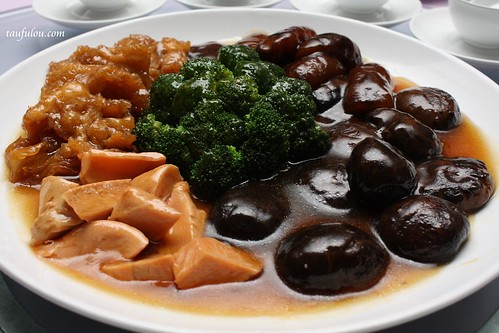 ‘Braised Abalone, Sea Cucumber and Black Mushroom with Broccoli’. The first thing that came into my mind was the abalone that had been cut into cubes shows the sign of big abalone and the chef use ‘2 head abalone’ that been boil, steam and marinate with its gravy for a few hours that makes it so soft, juicy and chewy. The soup base is top notch! 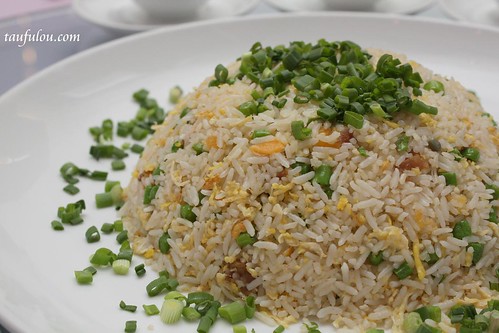 ‘Salted Egg Fried Rice’ fried with wok hei and the salted egg had just pull out the aroma and eat it with sambal, taste perfect. 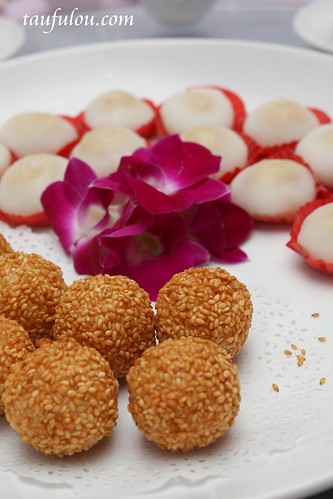 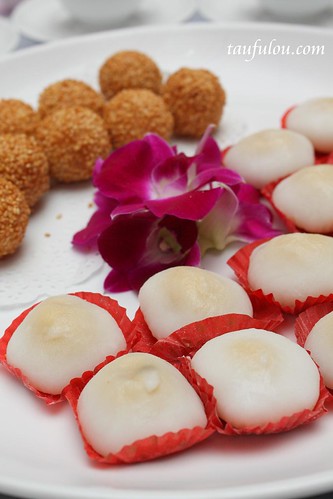 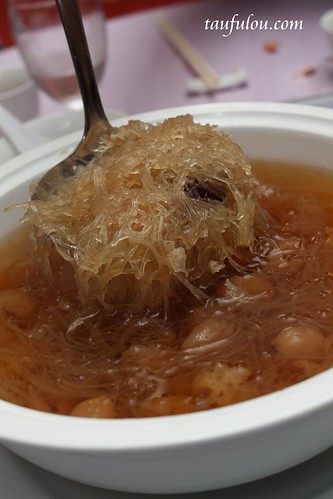 ‘Double Boiled Shark’s Fin Melon with White Fungus and Honey Dates’
Which is something new to me, as one of the type melon that had been finely chop till it look like shark fin. Then cook under high temperature to get the sweetness of it out and mix with the rest of the ingredient that end me with 3 bowl of it.

The wedding dinner set menu certainly serves great quality of food that I would say with a classic touch in a modern feel. The Chinese dish taste is very authentic as what I feel. If wedding dinner with this kind of serving, surely it would make the wedding even more perfect.

For more information you can check out at: