P.F Chang’s is one of the most successful Chinese Bistro brand in Middle East. Making its wave into the market four years back had since quite become a place for most Dubai folks to patron on this.

Constantly this outlet is pack with customers from it open its door till late night. It is also a very well known brand in the States as this is an American owned restaurant with Chinese Cuisine menu that I would say its a fusion Chinese Menu. 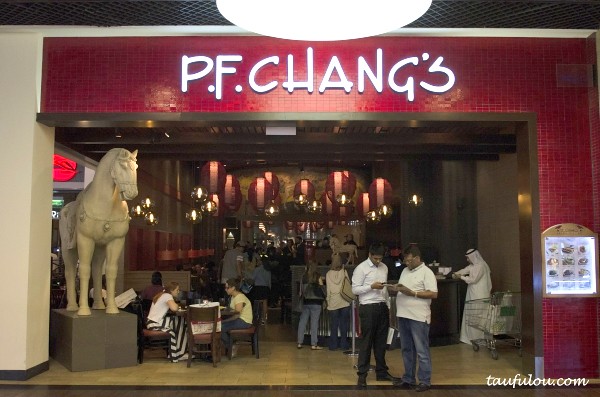 In the menu, it is not your typical Chinese menu as they have pretty good mix from char grilled duck, from hong kong with a fine twist and many other more. 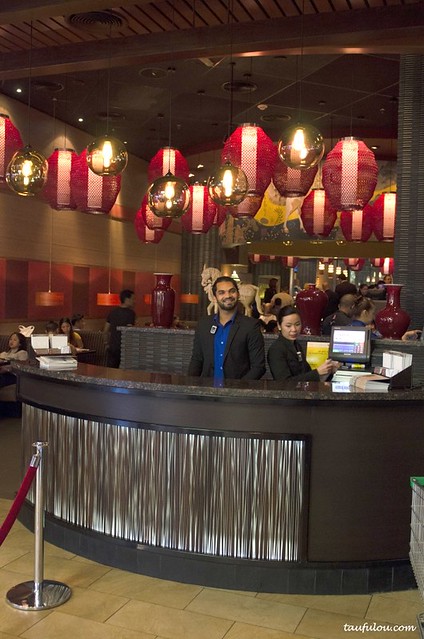 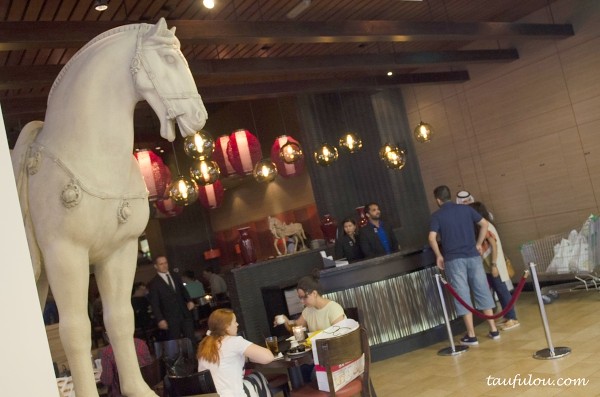 Upon stepping into the outlet, it certainly feels that you are actually stepping into a fine dine restaurant as the ambiance is quite porch, with some classic Chinese art on the ceiling, lovely dim lights, nice plate setting as it bends towards more contemporary dining. So fear not, as the pricing is not as high as what you thought. 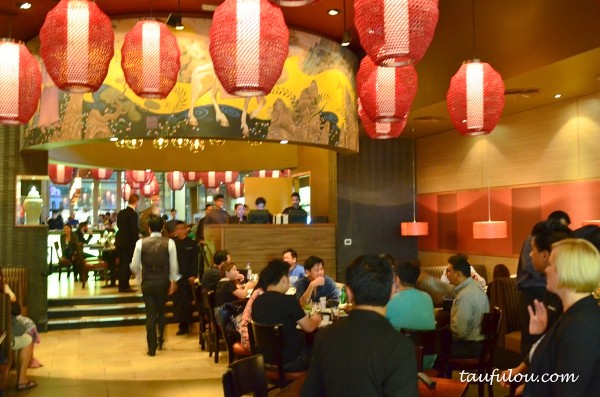 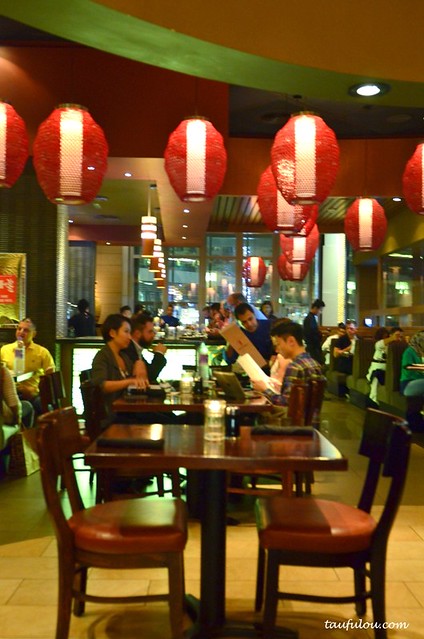 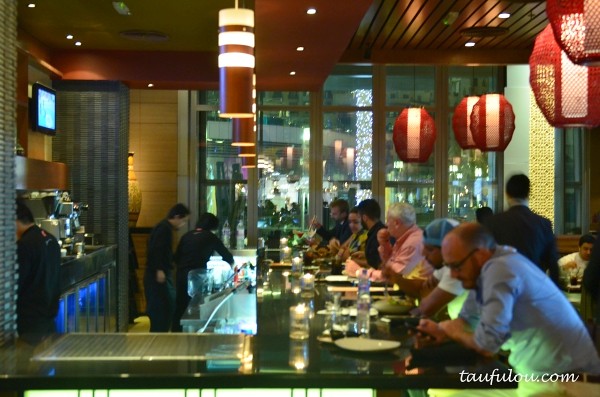 Apparently, if you are a single or a pair diners, you can get to choose to sit at the bar as it is nicely set up and you can see the bar tender in action. Friendly staff too. 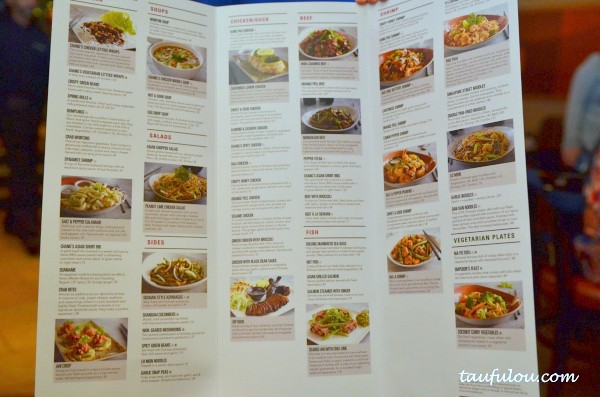 Menu is pretty straight forward as its one pager and next columm will be their American version dessert which is more on cakes. (click here for more) 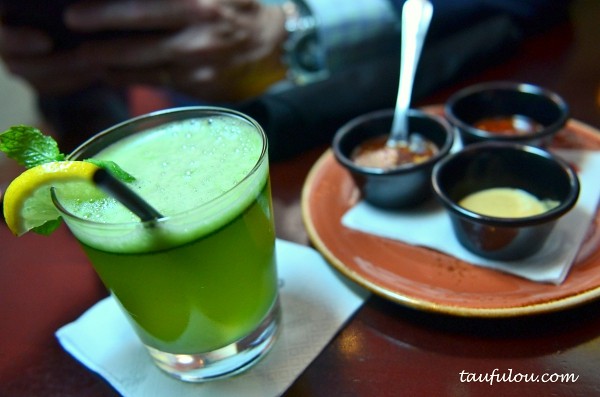 Being served with 3 types of sauces, we were thought how to mix it and follow the explanation, it end up to be good as the spicy you add in last. 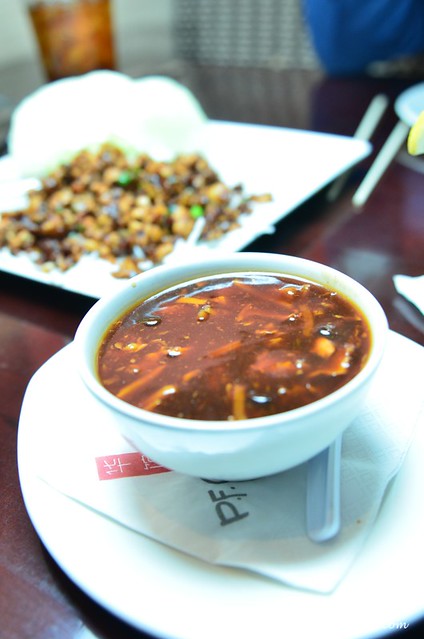 This is totally another dimension of Sweet & Sour Soup. All I can say that it is not taste as what we used to have, I would say its quite a Middle East version. 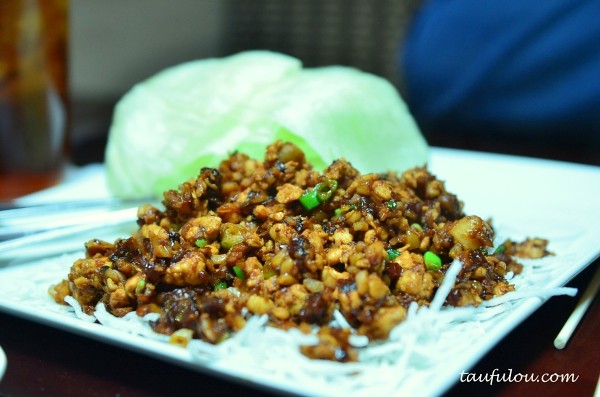 Chang’s Chicken Lettuce Wraps @ Dhs 44 is another popular starter here. Scoop a spoonful and place it on lettuce is the way how to eat on this this. Sweet in taste for first bite, then slowly the aroma of spiciness slowly builds up. 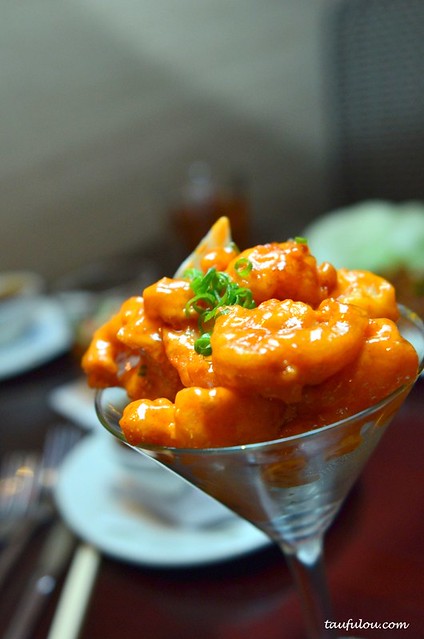 Upon ordering, I also do notice this Dynamite Shrimp @ Dhs 47 is being ordered on nearly every table as not only that. It is ordered by every individual per portion each, that turns out to be their best seller. Serve in a tall martini glass, as how it is presented that the aroma of the mild spicy is there and the shrimps are extremely fresh, nicely battered with a crunchy texture. Love the spiciness of it as they infuse with some Sriracha chili sauce in it. Pretty good stuff. No wonder so many people are ordering it. 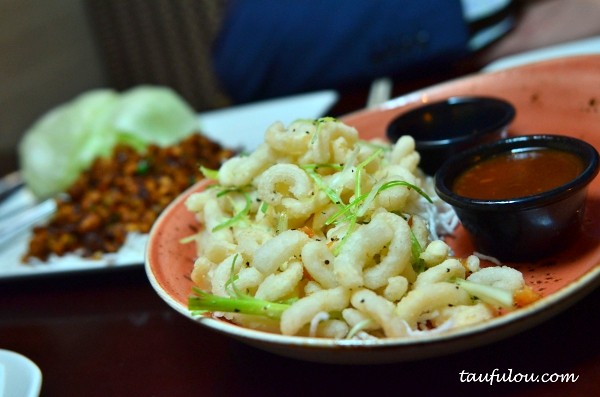 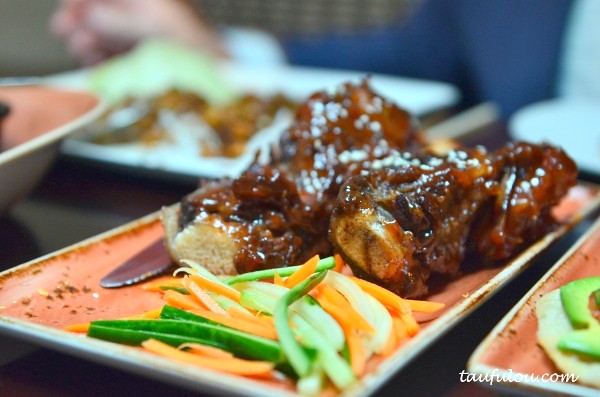 Looks fantastic when it was served and smells very good. Wok Charred Beef @ DHS 71 is done pretty well as Sauce is painted to perfection on the outer area as when you bite, its soft and juicy. After awhile towards the end, the taste went off. 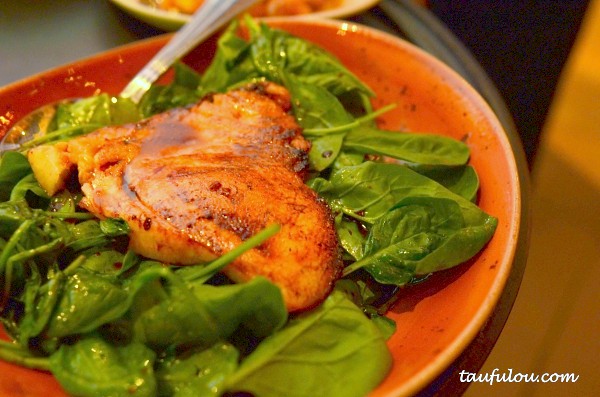 Star of the night is this Oolong Seabass @ Dhs 134 which do import their fish and Cook to perfection, that its well merited on the outer layer yet not too salty and just perfect. One catch is, did not taste any hint of Oolong . 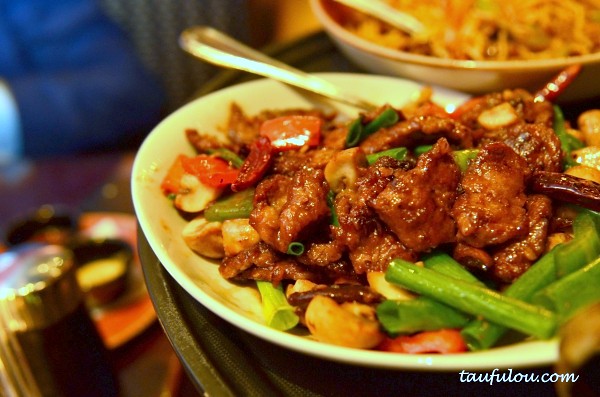 Wok Charred Beef is another of my favourite as this is not your typical Asian dish. Beef is cook nicely as its still very soft and juicy, and to go along with a bowl of rice would be great. 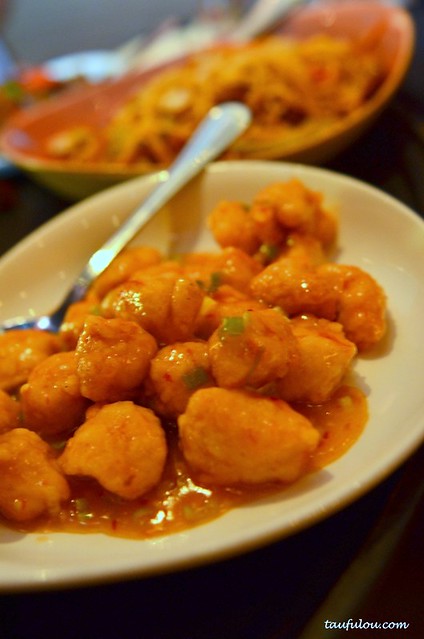 Sweet and sour chicken is something quite good. Eatch of the pop corn cubes uses chicken breast/ surprisingly, they still manage to cook with the chicken not too dry yet still moist. Taste is pretty interesting as can tasted, garlic, fresh other ingredients. 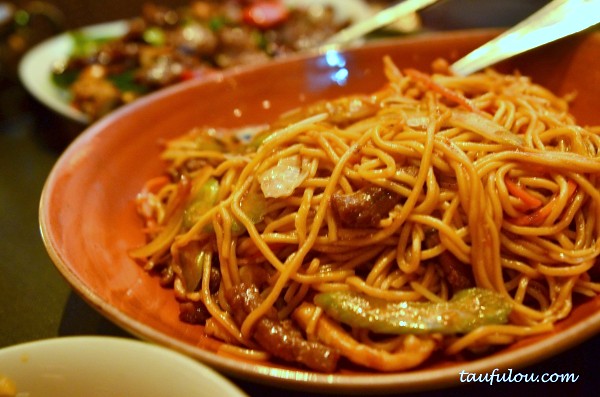 Lo Mein @ Dhs 51 is not bad for a fusion restaurant. It would be much better if it was fried slightly longer and with ‘wok hei’. 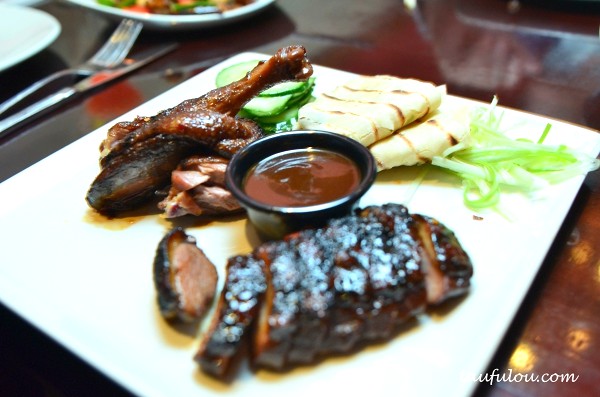 VIP DUCK @ Dhs 85 is another underdog that caught our attention after we tried. Both part are well season and marinated. I would want to say I highly recommended this as its not an ordinary duck. This is PF Chang special Duck range. 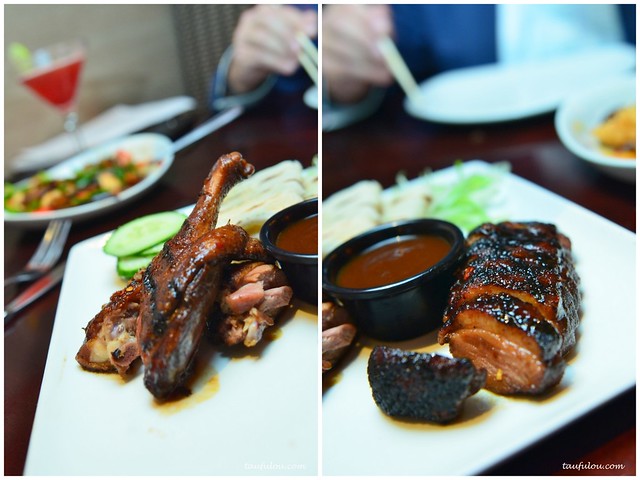 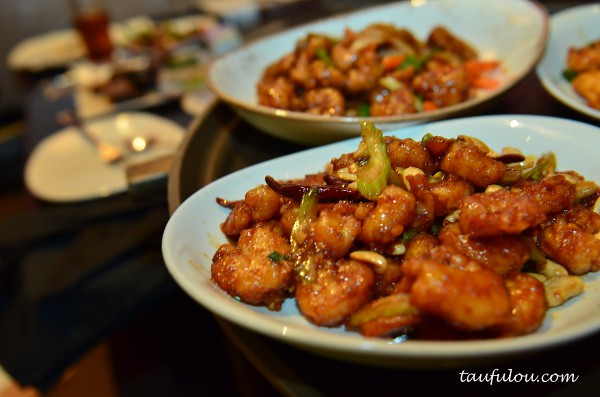 Kung Po Shrimp is quite a westernize version. Salty in first bite with mild spicy end. Still prefer our local ones. 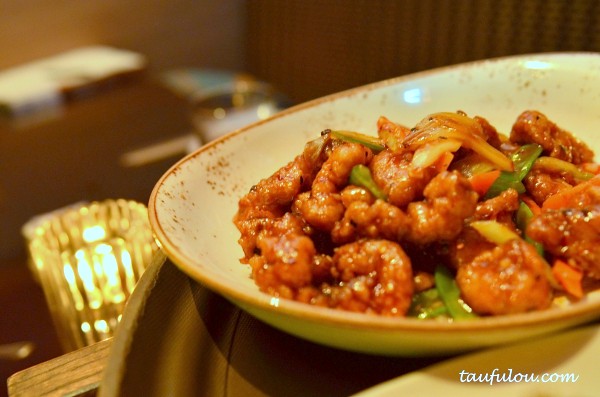 Hot fish is rather interesting as they are using groper fish as cook along with black bean sauce turns out to be alright.

Overall for a American restaurant with Chinese concept, they are not bad. The only catch will be there are quite number of items to fine tune if they were to penetrate Malaysia market and definitely will be a big market for our Muslim friends. A pretty good fusion dining. IHOP – International House of Pancakes @ Mall Of The Emirates, Dubai